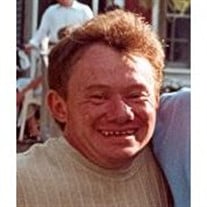 ATKINSON, NH - William S. ?Bill? Felides age 41 son of the late Milton and Mary Felides, died Monday October 15, 2007 at Parkland Medical Center in Derry, NH. Born in Woburn, MA, he was educated in Methuen Schools and was a graduate of Methuen High School. Bill was employed with Jameson Excavation in Atkinson, NH, a job he loved very much and will be deeply missed by his co-workers. Bill never thought of himself first, even in death he gave all that he had to others, becoming a full organ donor. His wonderful and generous spirit will live on and give many children and adults a new lease on life. Bill had a boxer dog named Louise whom he loved with all his heart. According to Bill?s family she continues to sit in the widow watching for his return home from work. Family came first, and according to his family, ?Uncle Bill? brought the greatest amount of joy to his many nieces and nephews. He was a best friend to many people and will be greatly missed. Bill was an avid sports fan and over the years spent many days and evening with his friends at the Knights of Columbus in Methuen. Bill?s family thanks them all for being so wonderfully kind to him. Bill was also an amateur photographer and loved capturing natures beauty. He leaves his sisters Elaine Fay ad her husband Allen of Methuen, Athena Melucci and her husband Richard, Bill?s best friend and Father of Atkinson, NH with whom Bill lived, and Marianne Bennett of Phoenix, AZ, Katherine Tomaselli and Cindy Ireland both of Maine. 1 brother Harry Felides also of Phoenix, AZ 1 sister-in-law Carol A. Felides of Methuen, wife of the late William N., who was also Bill?s brother who prededeased him in death. Many nieces and nephews. ARRANGEMENTS: Because of Bill?s love for children, memorials can be made in his name to the Make A Wish Foundation 66 Hanover Street Manchester, NH 03101. Family and friends may call Friday from 4:00p.m. ? 8:00p.m. with a prayer service at 6:00p.m. at the Kenneth H. Pollard Funeral Home, Inc., 233 Lawrence Street Methuen, MA 01844. Funeral will take place on Saturday at 10:00a.m. from the funeral home with graveside services at the Immaculate Conception Cemetery in Lawrence, MA

The family of William S. Felides created this Life Tributes page to make it easy to share your memories.