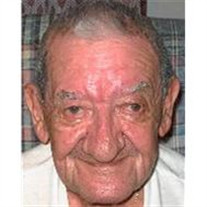 Methuen, MA- William J. ?Bill? Burgess Jr. died Friday, September 12, 2008 at his home, surrounded by his family. Born in Methuen to William and Ida (Lambert) Burgess, Bill lived in Methuen his whole life. A graduate of the Stephen Barker School in Methuen, Bill was a life long resident of Methuen. He worked as a Warehouse supervisor for A-Line tools in Lawrence for many years until his retirement. William served in the Navy reserves and was a member of the Methuen Post 122 American Legion. He enjoyed building and constructing anything, especially doll houses. Anyone that knew him knew that he loved buying scratch tickets and he was also a avid collector of baseball hats, having more than 300. The widow of Jean (Parah), William is survived by his four children, Thaddeus and his wife Judith Salach of Manchester, NH, Catherine and her husband Dennis Drouin of Methuen, Lisa and her husband Barney Carter of St. Marys, GA, Robin and her husband James Weir of Methuen, eight grandchildren, Benjamin Salach, Holly and her husband Roland LaFerte, Dennis Drouin Jr., William Drouin, Katie Weir, Bradley Carter, William Weir, Christopher Weir, and three great grandchildren, Maxwell, Jasmine and Logan. He also leaves behind his good friend and care taker of two years, Marisol Rivera. William was pre-deceased by his sister Claire Brucato. ARRANGEMENTS: Family and friends may call on Monday, September 15 from 4 to 8 PM at the Kenneth H. Pollard Funeral Home, 233 Lawrence St. Methuen. A Funeral Service will be held on Tuesday at 9 AM at the funeral home. As an expression of sympathy, memorial contributions may be made to the Merrimack Valley Hospice, 360 Merrimack St. Bldg 9, Lawrence, MA 01843.

The family of William J. Burgess Jr. created this Life Tributes page to make it easy to share your memories.