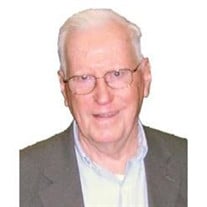 William F. Gallagher, 90, passed away peacefully at the Meadows Nursing Home in North Andover, Ma after a lengthy period of failing health. He was born in Lawrence, Ma on October 6, 1924, the son of William and Catherine (O?Neil) Gallagher. Bill was educated in the Lawrence schools and was also a graduate of Northeastern University with a degree in Electrical Engineering. He retired from Western Electric after a very successful career as an engineer specializing in design to manufacturing of telephone switching systems. He was most proud to have been a part of the design of early cell tower switching technologies which eventually led to the wide use of cell phones today. Bill and his wife Mary, who predeceased him in 1997, lived in Methuen all their lives with their 5 children. Bill was very active in Methuen politics and was a Town Meeting member, school board member, District Councilor, Councilor at Large, Town Assessor and Town Manager. In his Town of Methuen career he was very proud of getting the Comprehensive Grammar School built after this project had ground to a halt. He was even able to get the State of Massachusetts to fund 90% of this project. He was also responsible for negotiating significant waste management contracts for the town that saved millions of dollars. During major flooding of the Spicket River, Bill was able to direct emergency services in saving the town from exposed sewer lines that could have caused major pollution. Bill was a proud veteran of the United States Navy Sea Bees during World War II. He used the Sea Bee ?CAN DO? attitude in everything he did. Bill landed in Utah Beach approximately D 20 Days. The Sea Bees were an important part of building facilities to allow troops and supplies to come directly ashore without the need for landing craft. They also built bases and landing strips for the troops as they advanced into France and Germany. After returning from the European sector of the war in early 1945 Bill was deployed to the Asian Pacific front and was sent to New Caledonia where the Sea Bees loaded a complete Army Division with their tanks, artillery, ammunition and other supplies for the invasion of Okinawa and eventually Japan. They were to be part of a Japan invasion diversionary force that was expected to suffer heavy casualties. As Bill tells the story, on their way to invading Japan the atomic Bombs were dropped in Hiroshima and Nagasaki forcing the Japanese to surrender. Bill?s platoon eventually landed in Sasebo Japan where they helped the Japanese rebuild from the atomic bomb devastation. Bill was predeceased by his parents William and Catherine, his brothers John and Tom and his sisters Kay and Midge. Bill was also predeceased by his wife of 50 years Mary in 1997 and an infant son David in 1970. He is survived by his sister Dot Davies and husband Roger and sister Betty Driscoll, his children William and wife Donna, Bob and wife Diane, Susan, and John and wife Joanne. He leaves 9 grandchildren. Sean and wife Brenda, Kelly and significant other Aaron, Stacy and husband John, Kate and husband Michael, Michael, Sarah, Scott, Laura and Jenna. In addition he leaves 9 great grandchildren. The family is grateful for the compassionate and loving care provided by the doctors, nurses and staff at The Methuen Village, Nevins Home and The Meadows where he lived in the final years of his life. Compassionate Care Hospice also needs to be recognized for all they did to keep Bill comfortable over his final 15 months with us. Friends and guests are invited to call on Friday, April 17, 2015 at 11:00 until 1:00 PM at the Kenneth H. Pollard Funeral Home, 233 Lawrence St. Methuen. A funeral service will follow at the funeral home, beginning promptly at 1:00 PM. Interment to follow at Elmwood Cemetery in Methuen. In lieu of flowers, donations may be made to Fidelity House Human Services, 439 S. Union St. Suite 401 Lawrence, MA 01843. For directions and online guestbook, please visit the funeral home website, www.pollardfuneralhome.com. The Kenneth H. Pollard Funeral Home is honored to serve the Gallagher Family.

William F. Gallagher, 90, passed away peacefully at the Meadows Nursing Home in North Andover, Ma after a lengthy period of failing health. He was born in Lawrence, Ma on October 6, 1924, the son of William and Catherine (O?Neil) Gallagher.... View Obituary & Service Information

The family of William F. Gallagher created this Life Tributes page to make it easy to share your memories.

William F. Gallagher, 90, passed away peacefully at the Meadows...