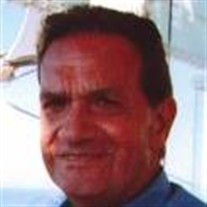 William E. Barry, 71, of Methuen, passed away peacefully from complications of cancer at home surrounded by his loved ones. William was born and raised in Lawrence, he resided in Methuen his entire adult life. He graduated from Central Catholic High School with the Class of 1963. William was an accomplished athlete in football and basketball. After graduating, he entered the Massachusetts Radio School in Boston. William enlisted in the US Coast Guard in August of 1965 and was honorably discharged in 1969. During his military service, he circumnavigated the globe, including both poles, on an ice breaker. After his military service he started his career with Hewlett – Packard as a bench technician, and ultimately promoted to a district sales manager. During his tenure he achieved the President’s Club Award, the highest award received, for recognition as the top District Sales Manager in the world. William also received many other achievement awards during his career. William was a devoted husband, father, grandfather and uncle who touched many lives in many different circles and will fondly be loved, cherished and missed. William is survived by his devoted wife Judith (Stevens) Barry, his son Erik J. Barry, his daughter, Shannon Barry, his step-son, Michael Boomhower and his step-daughter, Tracy Parker. He was the proud grandfather to Kevin Barry, Christopher Barry, Steven Parker, Katelyn Wallenhorst, Melanie Boomhower, Nicole Boomhower and Tia Boomhower. William was the cherished great-grandfather to Ava Cronin, Elliot Parker and Paige Wallenhorst. He was the brother to Kenneth Barry and is also survived by his beloved cat Moochi. Visitation for William will be held on Tuesday, January 9, 2018 from 4 – 8 PM at the Kenneth H. Pollard Funeral Home, 233 Lawrence Street, Methuen. Friends and family are cordially invited to attend. A Mass of Christian Burial will be celebrated on Wednesday, January 10, 2018 at 9 AM at Saint Monica’s Church, 212 Lawrence Street, Methuen. At the request of the family, all guests are highly encouraged to meet directly at the church. Interment will be private. To leave an online condolence please visit www.pollardfuneralhome.com. The Kenneth H. Pollard Funeral is proud to serve the Barry family.

William E. Barry, 71, of Methuen, passed away peacefully from complications of cancer at home surrounded by his loved ones. William was born and raised in Lawrence, he resided in Methuen his entire adult life. He graduated from Central Catholic... View Obituary & Service Information

The family of William E. Barry created this Life Tributes page to make it easy to share your memories.

William E. Barry, 71, of Methuen, passed away peacefully from...