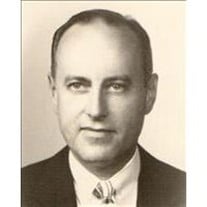 William A. Lannan age 97 of Hampstead, NH, died Monday, March 21st at Parkland Medical Center, Derry, NH. He was born in Lawrence, MA, son of the late Henry P. and Josephine (Somerly) Lannan. He was raised and educated in Lawrence, MA, graduating from Lawrence High School. He attended Boston University and graduated from Northeastern University. Bill was a US Army-Air Corps veteran of World War II, where he served as a Sargent Air Traffic Controller with the 8th Air Force in Britain and the Air Transport Command in Tripoli, North Africa. He was the recipient of the Distinguished Unit Badge with an Oak Leaf Cluster and the European, African, and Middle Eastern Service Medals. Bill was a configuration engineer. He was employed by various defense contractors and retired from GTE in 1990. He was predeceased by his wife Veronica ?Ronnie? (Smith) Lannan and a daughter Nancy Demers. He is survived by his daughters: Judith and her husband Richard Murphy of Brighton, IL and Geraldine Lannan and her partner Kent Hauenstein of East Hampstead, NH. Granddaughters: Ann Muder and Erin Pennington, Grandsons: Ian Murphy and Christopher Demers. Great Grandchildren: Sydney and Jack Muder, and Carina Veronica Demers. Brothers: Joseph A. Lannan of Florida and George A. Lannan of Methuen, MA. Several Nieces and Nephews Memorial visitation will be held Friday, Apr. 8th from 10:00 AM-11:30 AM, followed by a memorial service at 11:30 AM at the Kenneth H. Pollard Funeral Home. 233 Lawrence Street, Methuen, MA. Urn burial will follow in Elmwood Cemetery, Methuen. In lieu of flowers donations may be made to the charity of one?s choice. For directions and online guestbook, please visit the funeral home website, www.pollardfuneralhome.com. The Kenneth H. Pollard Funeral Home is honored to serve the Lannan family.

The family of William A. Lannan created this Life Tributes page to make it easy to share your memories.