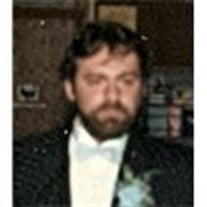 Methuen, MA ? Wayne A. Marchand, 53, died Thursday, January 19, 2012 at his home with his loving family by his side. Wayne was born July 30, 1958, the son of Arthur L. and Lorraine R. (Leveille) Marchand of Methuen. For 17 years, he had been employed as an equipment operator with Hutton Construction in Lawrence. In his free time, Wayne enjoyed fishing, riding his motorcycle, and spending time with his family and friends. He was also an avid New England Patriots fan. In addition to his parents, Wayne is survived by two sisters, Diane Dougherty and her husband Mark of Sandown, NH and Sheila Silva of Lawrence; five brothers, John Marchand and his wife, Brenda, of Exeter, NH, Dan Marchand of Methuen, James Marchand of Methuen, Arthur Marchand and his wife, Cheryl, of Methuen, Randy Marchand of Port St. Lucie, FL; many nieces and nephews; and his dog, Patches. Friends will be warmly received on Wednesday from 4-7 PM at the Kenneth H. Pollard Funeral Home, Inc., 233 Lawrence Street in Methuen. Funeral services will be held on Wednesday at 7PM at the funeral home. In lieu of flowers, memorial contributions may be made to Merrimack Valley Hospice, 360 Merrimack Street, Bldg 9, Lawrence, MA 01843.

The family of Wayne A. Marchand created this Life Tributes page to make it easy to share your memories.