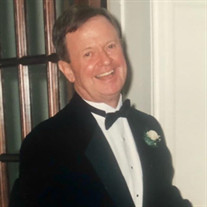 Warren W. Hayes of W. Yarmouth, Massachusetts, and former resident of Lawrence, Massachusetts, passed away surrounded by his family on Thursday, June 10, 2021, at the age of 84. Warren was born on November 2, 1936, in Lawrence, Massachusetts, to Thomas and Mary (Warren) Hayes. He graduated from Central Catholic High School, later returning as one of the first three lay teachers in the school’s history, and where he remained as a dedicated English teacher, coach, and mentor for 41 years, touching numerous lives along the way. Central was as much a part of Warren as Warren was a part of Central. Following high school, Warren continued his education, receiving degrees from both Boston College and Salem State University. Warren loved watching sports, especially his favorite team, the Red Sox. One of the highlights of his life was watching them play from a corporate box at Fenway with his daughter, Kristin. He spent hours doing the New York Times crossword, bravely completing the task in pen. However, his greatest joy in his retirement was the time he spent on adventures, and sometimes hilarious misadventures, with his grandchildren, Grant and Allyson. Warren was predeceased by his beloved wife, Joan (Chateauneuf), with whom he spent 38 wonderful years, and his sister, Jacqueline (Hayes) Dowe. He leaves behind his daughter, Kristin and her husband, Donn Frohock; his grandson, Grant “Harry'' Frohock; and his granddaughter, Allyson Frohock, his “honeypot.” In addition, he also leaves behind his brother-in-law, William Dowe, Jr., as well as many nieces, nephews and cousins. Family and friends are invited to call on Tuesday, June 15, 2021, from 2:00 PM until 6:00 PM at the Kenneth H. Pollard Funeral Home, 233 Lawrence Street in Methuen. A Mass of Christian Burial will be held on Wednesday, June 16, at 11:00 AM at St. Augustine’s Chapel, 128 Ames Street in Lawrence. Burial to follow at Elmwood Cemetery in Methuen. In lieu of flowers, donations in his memory may be made to The Warren W. Hayes Sponsorship & Scholarship Fund at Central Catholic High School, 300 Hampshire St., Lawrence, MA 01841. For directions and online guestbook, please visit the funeral home website, www.pollardfuneralhome.com. The Kenneth H. Pollard Funeral Home is honored to serve the Hayes Family.

The family of Warren W. Hayes created this Life Tributes page to make it easy to share your memories.