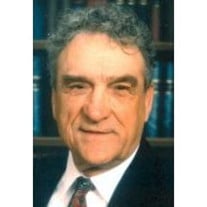 Nottingham, N.H.?Walter J. Hamel, 83, of Nottingham New Hampshire passed away at home on June 10th 2010 after a two year battle with cancer. Walter was born on December 4, 1926, in Lawrence, Massachusetts, the son of the late Walter J. and Mae (Buote) Hamel Sr. He is survived by Mary P. Dmytrow, his loving wife of 56 years. Walter attended Lawrence High School in Massachusetts and served in the U.S. Marines during World War II. He attended Macintosh Business School, graduated from the Bunker Hill Trade School which is Associated with the Boston Plasters Union in 1954. Thereafter, Walter built, repaired and rented homes / buildings in the greater Lawrence, Massachusetts Area, first as President of Suburban Household Enterprise, Inc. and later as President and Treasurer of Walter Hamel Construction Company. He built a house for his parents and helped his father by purchasing a building for his father?s barbershop. Walter especially enjoyed several years of working for St. Patrick?s Parish in Lawrence, where some of his work included plastering the church?s cathedral ceilings and building a garage for the convent. In 1978, Walter retired to Nottingham, New Hampshire, but continued to travel the USA teaching plastering and stucco techniques. More recently he practiced his trade by repairing brick steps. Walter enjoyed solving construction problems and working in plaster art, which he shared with his family and friends. In his youth Walter was an avid skier and skater, and for a short period of time owned racehorses. Walter read extensively and loved to debate current events and politics. In steadfast support of his two daughters, Walter was very progressive in supporting equal opportunity for women. As a builder, Walter deeply loved the life he built for himself and his family, first in Massachusetts and later in New Hampshire. He was loved and will be missed. Besides his wife, Mary, he is survived by two daughters, Audrey (husband Stephen) Colson of Vestavia Hills, Alabama and Melanie (husband Donald) Caspary of Springfield, Illinois. His brother Arthur and his wife Mary Hamel of Methuen, MA. A grandson, Mark Hamel Caspary of Springfield, Illinois and a granddaughter Stephanie L. Colson of Los Angeles, California. In addition, he is survived by three step grandsons Stephen (wife Crystal) Colson Jr. of Savannah, Georgia, and Erick and Steven Caspary of Springfield, Illinois; a great grandson Stephen Lane Colson III of Savannah, Georgia; a special nephew Thomas Borysek of Chicago, Illinois; and several other nieces and nephews. ARRANGEMENTS: Relatives and Friends are invited to pay their respects from 4-8PM on Sunday June 13th at the Kenneth H. Pollard Funeral Home 233 Lawrence St., Methuen. A Mass of Christian Burial will take place at St. Monica?s Church in Methuen at 9 AM on Monday, followed by Burial at St. Peter and Paul?s Cemetery also in Methuen. In lieu of flowesr donations may be made to Rockingham VNA and Hospice 137 Epping Rd., Exeter, NH 03833

Nottingham, N.H.?Walter J. Hamel, 83, of Nottingham New Hampshire passed away at home on June 10th 2010 after a two year battle with cancer. Walter was born on December 4, 1926, in Lawrence, Massachusetts, the son of the late Walter J. and Mae... View Obituary & Service Information

The family of Walter J. Hamel created this Life Tributes page to make it easy to share your memories.