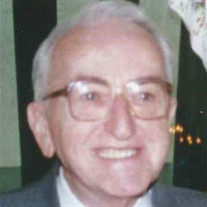 LAWRENCE, MA – Thomas (Tom) L. McCarthy, 95, formerly of Methuen and Lawrence, MA, passed peacefully into everlasting life on Saturday, December 15, 2018. Born in Lawrence, MA, the son of Hannah Dennehy McCarthy and Timothy McCarthy, the youngest of 7 children, Tom attended Saint Patrick’s Elementary School, Central Catholic High School, and was a 1942 graduate of Lawrence High School. After high school he entered the Augustinian Seminary. Following his time in the Seminary he enlisted in the U.S. Army, serving in the Asia-Pacific Theater. He was stationed in Japan, at the ending of World War II, during the Occupation and Reconstruction. Enlisted as a rifleman, Tom was also an entertainer for his fellow service members. He was even in a production of Gilbert & Sullivan’s “The Mikado,” which he still sang in his 95th year. After returning home to Lawrence, MA, Tom continued his education, receiving a Bachelor’s Degree from Staley College, in Massachusetts. He was then hired in the city’s Weights & Measurements Department. Tom later became a school teacher for local elementary schools. He also worked for Raytheon where he was a technical writer until retirement. Tom married the love of his life, Mary Jane Proulx, in 1950, and had 30 loving and caring years together while raising their 3 children, until her passing. Six years later, in 1987, Tom was blessed to find love again and married Cecile Joncas Williams. Tom had a deeply-rooted faith and was a life-long parishioner of Saint Patrick’s Parish of Lawrence, MA. A selfless man, he was always caring for others, volunteering often at Lazarus House of Lawrence in their early years and had a great passion to see an end to world hunger. He was very involved in local politics, campaigning for his brother-in-law and former State Representative, William Casey. Tom was a big local sports fan, favoring the Red Sox and Bruins, and a life-long fan of the Central Catholic High School Basketball Team. He enjoyed family vacations at Seabrook beach each summer. Music was an integral part to his being. He had a wonderful voice and entertained us all from boyhood until his last days. He’ll be missed for his love of life and people, his beautiful smile and charming personality, and his great sense of humor. Tom’s family will carry on his spirit and great passion for his family. They will celebrate this Christmas with the great enthusiasm and faith he had for the holiday with him in their hearts. Survivors include his beloved sons, Francis McCarthy of Danvers, MA and Dennis McCarthy of Salem, NH; his daughter-in-law Marilyn McCarthy of Salem, NH; his granddaughters Allison Carvalho of Haverhill, MA, Meredith McCarthy of Lowell, MA, and Paige Petroni of Lawrence, MA; his grandson-in-laws Luiz Carvalho of Haverhill, MA and Jared Petroni of Lawrence, MA; his great-granddaughters Gabriella and Juliana Carvalho of Haverhill, MA. Thomas McCarthy was pre-deceased by his first wife Mary Jane (Proulx) McCarthy; his son, Thomas McCarthy; his second wife Cecile (Joncas) Williams McCarthy; his siblings Mary, Timothy, Marguerite, Cornelius, Jane, and Josephine. He also leaves behind many nieces and nephews and his most cherished and dear friend Bob Castignetti of Andover, MA. His family offers heartfelt thanks and gratitude for the loving care he received from the staff of Mary Immaculate Nursing Center and Beacon Hospice. Family and friends will honor and celebrate Tom’s life by gathering for his calling hours on Wednesday, December 19, 2018 from 4 - 7 PM at the Kenneth H. Pollard Funeral Home, 233 Lawrence Street, Methuen. His Mass of Christian Burial will take place on Thursday at 11 AM at St. Patrick Parish, 118 S. Broadway, Lawrence. Burial will follow in St. Mary/Immaculate Conception Cemetery in Lawrence. In lieu of flowers, memorial contributions can be made to the Lazarus House Ministries, ATTN: Ellen, PO Box 408, Lawrence, MA 01842, https://lazarushouse.org/ways-to-give/#memorial-tribute-gifts or to Mary Immaculate Nursing/Restorative Center, ATTN: Development, 172 Lawrence Street, Lawrence, MA 01841, www.mihcs.org/make-a-gift/. To send a condolence to Tom’s family, please visit www.pollardfuneralhome.com. The Kenneth H. Pollard Funeral Home is honored to serve the McCarthy family.

The family of Thomas L. McCarthy created this Life Tributes page to make it easy to share your memories.