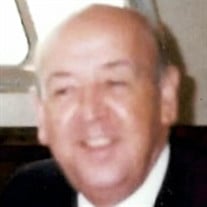 Haverhill – Thomas A. Leone, 86 of Haverhill, passed away on Friday, April 24, 2020 at Wingate Residences at Haverhill. He was the beloved husband of the late Jacqueline S. (Devaux) Leone, to whom he was married for 55 years. Born on June 9, 1933, he was the son of the late Joseph A. and Celeste (Valetta) Leone. Thomas graduated from Bordentown Military School in New Jersey and enlisted with the U.S. Army from 1954 to 1957, while proudly serving his country during the Korean War. He was an SP3 with the 520th Military Policy Company. He met his future wife, Jacqueline, in Paris, France in 1958. Thomas was the owner and operator of Leone Liquors in Methuen for over 5 years. In his earlier years, he was very involved in many activities, charities, and fundraisers. He was a Democratic Delegate at the 1980 convention. He ran for Massachusetts State Senate. He also worked at the Massachusetts State Lottery Commission, was previously the head of the Massachusetts Victims of Violent Crime Compensation Fund, and was a Justice of the Peace from 1984 to 2017. Thomas was a devote catholic, and family was the most important thing in his life. Thomas will be deeply missed by his daughter, Danielle Capone, and her husband, Paul, of Kingston, NH; his grandson, David Noble of Derry, NH; his sister, Mary Lyons Johns of Newburyport, MA; his beloved bird, Honey; and many nieces and nephews. He is predeceased by his 3 brothers, John, Joseph, and Gerald Leone and his sister, Carmella Mararian. The family wishes to thank the staff at Wingate Residences at Haverhill for their dedication and support to Thomas and especially during this very sad and trying time. Due to the current pandemic, all services will be private. In lieu of flowers, memorial contributions can be made to Veterans Northeast Outreach Center, 10 Reed Street, Haverhill, MA 01832. To send an online condolence, please visit www.pollardfuneralhome.com. The Kenneth H. Pollard Funeral Home is honored to serve the Leone family.

Haverhill &#8211; Thomas A. Leone, 86 of Haverhill, passed away on Friday, April 24, 2020 at Wingate Residences at Haverhill. He was the beloved husband of the late Jacqueline S. (Devaux) Leone, to whom he was married for 55 years. Born on... View Obituary & Service Information

The family of Thomas A. Leone created this Life Tributes page to make it easy to share your memories.