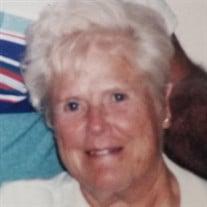 Theresa (Landry) Nolet, 93, of Bedford, NH, longtime resident of Salem, NH, passed away peacefully on April 28, 2021 at Hillsborough County Nursing Home in Goffstown, NH. She was born to the late William and Eva (Dube) Landry on December 12, 1927 in Lawrence, MA. Theresa worked for many years as an assembler for Western Electric and was a communicant for Mary Queen of Peace in Salem, NH. She enjoyed many of life’s activities; knitting, golfing, playing 45’s, enjoying the occasional gin & tonic and trips to Foxwoods. Known as a selfless woman, Theresa touched many lives in many different circles and will fondly be loved, cherished and missed by all. Theresa is survived by her three dear children; her son William Nolet of Windham, NH, her daughter Paula Chisholm and her husband David of Bedford, NH and her daughter Pamela Jackson of Salem, NH. She is also survived by her nine grandchildren, her eight great-grandchildren as well as several nieces and nephews. In addition to her parents, she was predeceased by husband Arthur Nolet in March, 1983, her daughter-in-law Louise Nolet and her son-in-law Kenneth Jackson. Visitation for Theresa will be held on Friday, May 14, 2021 from 9-11 AM at the Kenneth H. Pollard Funeral Home, 233 Lawrence Street, Methuen. A funeral service will be held at 11 AM the conclusion of calling hours at the funeral home. Interment to follow at Elmwood Cemetery, 130 North Lowell Street, Methuen. The Kenneth H. Pollard Funeral Home is proud to serve the Nolet family.

The family of Theresa (Landry) Nolet created this Life Tributes page to make it easy to share your memories.