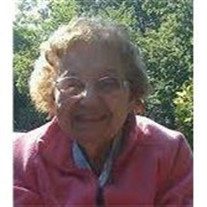 Theresa B. (Bonenfant) Bernard, age 91 of Lawrence, passed away peacefully on February 17, 2016, at the Mary Immaculate Restorative Center surrounded by her loving family. Theresa was born in Lawrence on July 21, 1924, to the late Eustache and Bernadette (Charest) Bonenfant. She worked in the cafeteria at the Sacred Heart School for 10 years. As a teenager growing up, Theresa worked in the Everett Mills in Lawrence, and performed country western songs on a local radio station. Mrs. Bernard also performed in several variety shows with her sisters. She was a member of the Merrimack Valley Chapter of Sweet Adelines for many years where she was known as the Sunshine Lady. She was also a former communicant of Sacred Heart Church of Lawrence. Theresa loved sewing, baking, crocheting, singing and cooking for her family. She also loved gardening often times strangers would stop and admire her roses. Mrs. Bernard enjoyed the beach, and spending time with her family with whom she loved dearly. At Mary Immaculate, Theresa will be lovingly remembered as ?Madame.? Theresa was the beloved wife of the late Jean Rene Bernard with whom she shared 57 years of marriage. She was the devoted mother of Patricia Fichera and her late husband Vincent of Methuen, Peter Bernard and his girlfriend Kimberly Vance of Lawrence, Mark Bernard and his wife Karin of Salem, NH, Pamela Davis and her husband Robert of Waltham, and the late Paul Bernard. Mrs. Bernard was the dear sister of Jacqueline Isabelle and Joseph Bonenfant. She was the loving grandmother of Ashley, Vincent, Allison, Amanda, Robby, Heather, Emma, Arianna, and Corinne. Theresa's family would like to extend their most sincere gratitude to the staff at the Mary Immaculate Restorative Center for their care and compassion shown to Theresa during her stay. Friends and guests are invited to call on Sunday, February 21, 2016, from 2:00 PM until 6:00 PM at the Kenneth H. Pollard Funeral Home, 233 Lawrence St. Methuen. A Mass of Christian Burial will take place on Monday, February 22, 2016, at 10:00 AM at St. Michael?s Church of North Andover. Interment to follow at Sacred Heart Cemetery of Andover. Donations in Theresa?s memory may be made to Mary Immaculate Restorative Center, 172 Lawrence St. Lawrence, MA 01841. For directions and online guestbook, please visit the funeral home website, www.pollardfuneralhome.com. The Kenneth H. Pollard Funeral Home is honored to serve the Bernard Family.

Theresa B. (Bonenfant) Bernard, age 91 of Lawrence, passed away peacefully on February 17, 2016, at the Mary Immaculate Restorative Center surrounded by her loving family. Theresa was born in Lawrence on July 21, 1924, to the late Eustache and... View Obituary & Service Information

The family of Theresa B. Bernard created this Life Tributes page to make it easy to share your memories.

Theresa B. (Bonenfant) Bernard, age 91 of Lawrence, passed away...