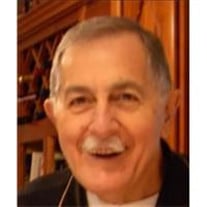 Thanoosh (Daniel) Tutunjian, age 81, passed away on March 15, 2015 at the Methuen Health & Rehabilition Center. He was born on June 6,1933 in Lawrence,Mass. Dan was predeceased by his parents, Hovanes and Azniv Tutunjian, his aunt Alice Mardirosian Manoian, and maternal grandparents Eknadios and Jouvar Mardirosian. Dan grew up in Lawrence and Methuen and graduated from Searles High School in Methuen. After graduation, he enlisted and served honorably in the Army from 1953-1956. After his military service he resided in Methuen and Andover, and worked for Western Electric in North Andover for 10 years and then for the Defense Department of the Federal Government in various Massachusetts locations for 30 years as a Quality Assurance Specialist in the Eastern Defense Contract Management District, retiring from his last position at the Andover Raytheon plant in 1996. He was an avid follower of Boston sports teams and of Notre Dame football, attending many of their games. He also was a life member of the Elks in Lawrence and enjoyed spending time at the Elks lodge. Dan is survived by his younger brothers Ara and Dick, Dick's wife Teresa, Ara's daughter Kara and son Damon, Damon's wife Josefin and their daughter Juliette. Also , Dan's cousins, Susan Manoian Clark and Alan Manoian, and Susan's husband Paul Clark, and their son Benjamin. Per the family?s request, a private funeral service will be held. In lieu of flowers, donations may be made to the St. Vartanantz Armenian Apostolic Church, 180 Old Westford Rd. Chelmsford, MA 01824. For online guestbook, please visit the funeral home website, www.pollardfuneralhome.com. The Kenneth H. Pollard Funeral Home is honored to serve the Tutunjian Family.

Thanoosh (Daniel) Tutunjian, age 81, passed away on March 15, 2015 at the Methuen Health & Rehabilition Center. He was born on June 6,1933 in Lawrence,Mass. Dan was predeceased by his parents, Hovanes and Azniv Tutunjian, his aunt Alice Mardirosian... View Obituary & Service Information

The family of Thanoosh (Daniel) Tutunjian created this Life Tributes page to make it easy to share your memories.