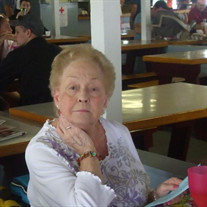 Teresa M. “Terry” Carney, 88, of Lawrence, MA, formerly of Londonderry, New Hampshire, passed away on Monday, September 27, 2021 at the Mary Immaculate Restorative Nursing Center in Lawrence. Terry also known as “Tootsie” was born in Lawrence on March 13, 1933, the daughter of the late Wilfred and Teresa (Moher) Chateauneuf. Terry graduated from St. Rita's Grammar School and St. Mary's High School. She married William G. Carney on January 20, 1952. In October 1956 Terry and Bill a Navy Veteran purchased their first home in Salem, NH. Terry became a homemaker tending to her family’s needs first and foremost. She was dedicated to her family and her loved ones. She was active in St. Joseph's Parish and School. Terry also was a school volunteer bringing the sisters their lunch and attended many field trips as a room mom. She was a member of the Catholic Daughters where she made many lifelong friends. The family would often rent a cottage at Seabrook Beach in the 1960's thru early 1970's. She would put her chair in the water at low tide and watch over her boys, while often reading a good book. When her children were older she was employed at The Hampshire Room, a Hallmark Card and bookstore in the Salem Plaza from the day it opened to the day it closed. Terry and Bill grew up in the Basswood and Juniper Street sections of Lawrence. Eventually, they moved to Londonderry, NH to their enjoyed retirement. Together, Terry and Bill traveled to Ireland, England, and Arizona. In November 2019, her husband of sixty-seven years passed away. Terry then settled in to assisted living at Marguerite’s House in Lawrence. During her time she volunteered at local grammar schools to read to the young children. She also loves animals and had several dogs and cats throughout her life. In addition to her parents, Terry was predeceased by her sister, Joan Hayes. Terry's family would like to thank the staff of the Mary Immaculate Restorative Nursing Center, Marguerite’s House and Merrimack Valley Hospice for the care given to her. She is survived by two sons, William T. Carney and his wife, Deborah of Darien, CT, and Kevin M. Carney and his wife, Cheryl of Derry, NH; cherished four grandsons:Thomas and Lisa Carney of Rockville, MD, Stephen and Ashton Carney of Ridgefield, CT, Matthew Carney and Corey Mota of Salem , NH, and Christopher Carney and fiancée, Maggie Farina of Londonderry, NH. Terry always wanted to have a daughter. She had two boys who later had two boys each. She finally got her wish much later in life becoming the very proud great -grandmother to her much loved two great- granddaughters: Nora Joan Carney of Salem, NH, and Claire Josephine Carney of Rockville, MD. Who were the joys in her life. Terry is also survived by several nieces, and cousins. Terry also maintained close friendships with the children of her dear friends who predeceased her. At the request of the family, all services will be private. The Kenneth H. Pollard Funeral Home is honored to serve the Carney Family.

The family of Teresa M. "Terry" Carney created this Life Tributes page to make it easy to share your memories.