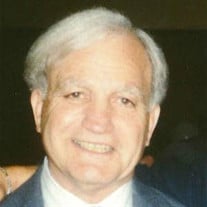 Methuen – Stephen J. Perocchi, 89 of Methuen, passed away peacefully Saturday, June 2, 2018 at the High Pointe Hospice House in Haverhill, MA surrounded by his loving family. He was the beloved husband of Nancy L. (Ouellette) Perocchi, to whom he was married for 58 years. Stephen was born in Lawrence on May 23, 1929, the son of Lorenzo and Amelia (Fillipon) Perocchi. He grew up in Lawrence and graduated from Lawrence High School, class of 1947. He then went on to play football at the University of New Hampshire in Durham and graduated with a bachelor’s degree in history. He proudly served his country as an officer in the U.S. Army during the Korean War and the European reconstruction. Stephen was a Physical Education teacher at Lawrence High School for over 40 years until his retirement in 1993. He was also a football coach for over 30 years at various schools; Brooks School in North Andover, Methuen High School, and Lawrence High School. He was a great mentor to his students and players. He was inducted into the Football Hall of Fame for Lawrence High School and UNH. Also, inducted into the Massachusetts Coaches Hall of Fame. Stephen was an avid sports fan and especially loved watching the New England Patriots and the Boston Red Sox. In his free time, he enjoyed spending time with his family and grandsons swimming and walking the beach. Stephen will be deeply missed by his wife, Nancy; 3 daughters. Lisa Perocchi and her companion, Emerie Arsenault, Jr. of Methuen, Kim von Klock and her husband, Bill of Walpole, and Stephanie Perocchi and her husband, Philip Maynard of Stow, MA; 4 grandsons, Brett & Drew von Klock and Nathaniel & Benjamin Maynard; and several nieces and nephews, including his nephew, Bill Perocchi, who was like a son to him. Stephen’s family would like to thank the nurses and staff at the High Pointe House for the special care and attention they provided during his time there. Family and friends will honor and celebrate Stephen’s life by gathering for his calling hours at the Kenneth H. Pollard Funeral Home, 233 Lawrence Street in Methuen on Wednesday, June 6, 2018 from 4 – 8 PM. His Mass of Christian Burial will take place on Thursday at 11 AM at St. Monica’s Church, 212 Lawrence Street, Methuen. Burial will follow at Elmwood Cemetery in Methuen. Memorial contributions can be made in Stephen’s memory to St. Jude Children’s Research Hospital, 262 Danny Thomas Place, Memphis, TN 38105. For directions or to send a condolence to Stephen’s family, please visit www.pollardfuneralhome.com. The Kenneth H. Pollard Funeral Home is honored to serve the Perocchi family.

The family of Stephen J. Perocchi created this Life Tributes page to make it easy to share your memories.