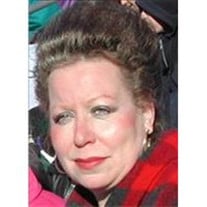 Stephanie Mary (Belko) Hunter passed away on November 28, 2015 of a long illness at the Merrimack Valley Hospice House in Haverhill MA. Born on December 20, 1951, she was 63 years old. Stephanie grew up in Salem NH, the daughter of the late Stephanie Mary Belko Sr. and John S. Belko; she attended Salem grammar schools and was a graduate of Salem High school, class of 1969. Furthering her education and her love for art and illustrating, she attended the Art Institute of Boston, graduating with a degree in fashion design. After graduation, see worked for her father an independent Boston graphic designer, John Belko and Associates, whose main clients included the Gillette Razor Blade Company and American Optical. She later worked for the Gun Studios as a Senior Production artist and illustrator supporting the clients of Dunkin Donuts, Talbots and many Boston banks. She was with and married her longtime companion and pre deceased husband, Richard Hunter, for 32 years. In her final years the couple returned to Salem NH, to take care of Stephanie?s aging mother, she also worked at Putnam Investments as a client representative and enjoyed many rewarding years and developed many friends. Her life time love of art, animals and her family filled her remaining years. Stephanie is survived by her brother John M. Belko Sr., two Nephews, Joshua and John M. Belko Jr. as well as many cousins, nieces, nephews and loving friends. The Belko family would extend their deepest appreciation to all caregivers that took care of Stephanie as well as the many friends that made her days comforting and re-assuring. Thanks to you all. A wake will be held for family and friends to pay their last respects at the Kenneth H. Pollard Funeral Home, 233 Lawrence St. Methuen on Thursday, December 3, 2015 from 5:00 PM until 8:00PM. A funeral service will be held on Friday, December 4, 2015 at 10:30 AM at the Kenneth H. Pollard Funeral Home, Msgr. Peter Azar of St. Anthony?s Maronite Church of Lawrence to officiate. In lieu of flowers, donations may be made to the Merrimack Valley Hospice House in Haverhill Ma. or the MSPCA Nevins Farm, 400 Broadway Methuen, MA 01844. The Kenneth H. Pollard Funeral Home is honored to serve the Belko Family.

Stephanie Mary (Belko) Hunter passed away on November 28, 2015 of a long illness at the Merrimack Valley Hospice House in Haverhill MA. Born on December 20, 1951, she was 63 years old. Stephanie grew up in Salem NH, the daughter of the late... View Obituary & Service Information

The family of Stephanie Mary (Belko) Hunter created this Life Tributes page to make it easy to share your memories.