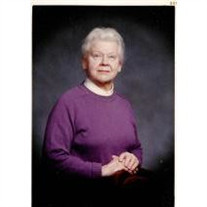 Salem, N. H. ? Stephanie M. Belko ,RN., 94, passed away Saturday the 21st of January at the Pleasant Valley Nursing Center in Derry, N. H. , surrounded by her family, after a short illness because of a long period of declining health. Stephanie was born in Rumford Maine on June 19th, 1917 the daughter of Bernard and Victoria Bush . She, along with her parents moved to Lawrence, MA. where they resided for many years. Stephanie was a graduate of Lawrence High school. She went on to pursue her degree in nursing after graduating from high school and was her class president at St. John?s teaching Hospital in Lowell Ma. Stephanie and her deceased husband John S. Belko met at a church social in Lawrence and were married September 16th, 1945 at the end of World War II. They raised two children; John M. Belko Sr. the widower of Joyce (Daher) Belko, and his fianc�e Ellen McNamara Reusch, as well as her daughter Stephanie Belko Hunter, the widow of Richard Hunter. Stephanie is also survived by her two loving grandson?s, John M. Belko Jr, and Joshua M. Belko who were her pride and joy. Survivors also include several nieces nephews. Stephanie was predeceased by her two brothers, Stanley Bush , and Dr. Alphonse Bush. Stephanie was a lifelong gardener and some say began the green movement in Salem, NH, having served as past president of both the Salem Garden Club and the New Hampshire Federation of garden clubs. Her passion for growing plants and trees is evidence at her beloved home in Salem, which her children and grand children now maintain meticulously. Stephanie was always at the ready to provide her nursing skills and in her later years, she would call herself a Regular Nag, (RN). Stephanie was also an accomplished artist and animal lover, donating to both open space causes and many animal protection organizations throughout her life. Arrangements: Funeral Services Thursday morning 11:30 at Kenneth H. Pollard Funeral Home 233 Lawrence Street Methuen. Friends will be warmly received on Wednesday from 5-8 pm and Thursday morning from 10 to 11:30 at the funeral home Donations may be made in lieu of flowers, to the New Hampshire Audubon Land Conservation at www.nhaudubon.org and the Massachusetts Society for the Prevention of Cruelty to Animals, WWW.MSPCA.ORG

Salem, N. H. ? Stephanie M. Belko ,RN., 94, passed away Saturday the 21st of January at the Pleasant Valley Nursing Center in Derry, N. H. , surrounded by her family, after a short illness because of a long period of declining health. Stephanie... View Obituary & Service Information

The family of Stephanie M. Belko created this Life Tributes page to make it easy to share your memories.