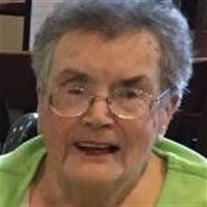 Shirley A. (Poulin) St. Hilaire, 80, of Methuen, passed away on June 12, 2018 at Holy Family Hospital in Methuen surrounded by her devoted family. Born on October 24, 1937 to her parents, the late Henry and Alma (Perry) Poulin, she was raised and educated in Lawrence. Shirley attended St. Anne’s High School graduating with the Class of 1955. Shortly after graduating, she married her sweetheart at St. Anne’s in Lawrence. Shirley was a selfless and kind woman who was the beloved matriarch of her family. After her husband’s retirement, they travelled extensively through Europe, especially Austria, visiting many places where the “Sound of Music” was filmed. Shirley was very fond of “Gone with the Wind”, devoting an entire room in her home to the film. She enjoyed the simple pleasures of life and had a love for the lottery. Shirley touched many lives in many different circles and will fondly be loved, cherished, and missed. Shirley is survived by her devoted husband, Albert St. Hilaire Jr of Methuen, with whom she would have celebrated 62 years of marriage on July 21st. She was the dear mother to her three children; her daughter, Cheryl Norris and her husband Bo of Methuen, her son, Michael St. Hilaire and his wife Lorraine of Methuen, and her daughter, Linda Guittarr and her husband Mark of Derry, NH. Shirley was the proud grandmother to her four grandchildren; Alex, Rachel, Shelley and John. She is also survived by her two sisters, Dorothy Blackwell of Methuen and Carol Fichera and her husband John of Haverhill. Shirley was the proud aunt to many nieces and nephews, especially Pauline Riccio and her husband Randall of Haverhill. She was predeceased by her son William St. Hilaire and her sister Alfreda Lambert. All services for Shirley were privately held. To honor Shirley’s memory please make a contribution in her name to Nevins Nursing and Rehabilitation, 10 Ingalls Court, Methuen, MA 01844. Shirley’s family is extremely thankful for the care she was given during her stay at Nevins. To leave an online condolence, please visit www.Pollardfuneralhome.com. The Kenneth H. Pollard Funeral Home is proud to serve the St. Hilaire family.

Shirley A. (Poulin) St. Hilaire, 80, of Methuen, passed away on June 12, 2018 at Holy Family Hospital in Methuen surrounded by her devoted family. Born on October 24, 1937 to her parents, the late Henry and Alma (Perry) Poulin, she was raised... View Obituary & Service Information

The family of Shirley A. (Poulin) St. Hilaire created this Life Tributes page to make it easy to share your memories.