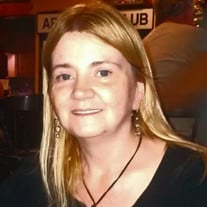 Sheila G. (Dotson) Piazza, age 59 of Methuen, MA passed away peacefully on February 26th, 2022, with her loving family by her side. Sheila was born in Cleveland, Ohio on August 23rd, 1962, and moved to Massachusetts during her adolescence years. She graduated with the class of 1979 from Greater Lawrence Technical High School, Andover MA. Sheila had a few different jobs throughout her life, including running a daycare out of her own home and working as a cashier at Market Basket. However, her favorite job was raising her three beautiful children who meant the world to her. With unconditional love, she cherished and adored them. She was an amazing, wonderful mother and her children are truly blessed to be able to call her mommy. On February 17th, 2007, Sheila had married her best friend, her soulmate, William “Billy” Piazza. A week before her passing, they had celebrated their 15th wedding anniversary. They were inseparable and loved being in each other’s company. Whether it be running errands, stopping by the American Legion, hanging out at the Arlington Social Club, or just simply relaxing at home, they were never far apart from one another. Billy’s love for Sheila was like a fairy tale. He would do anything for her, no matter how big or small the request was, he was always right there. Sheila had developed a soft spot in her heart for a special little Chihuahua named Colby. She would get extremely excited when her youngest daughter would bring Colby to see her. She always had a large stash of treats for him and would give him as many as he wanted when her daughter wasn’t looking. It brought her great joy to have Colby curled up next to her, while she petted the middle of his forehead. Sheila enjoyed crocheting and reading novels by her favorite author, Stephen King. She loved playing Yahtzee, 45s, and Gin Rummy, especially with her children. One thing she absolutely loved to do was to prank her “Favorite Son-In-Law” by hiding a plastic toy rat in random gifts for him. They have been going back and forth with this prank for over 5 years and had continued playing right up until her passing. It was Sheila’s turn to be prank, but unfortunately, she wasn’t able to discover the rat inside the Metamucil container. Sheila will be deeply missed by her husband, William “Billy” Piazza, of Methuen, MA, her children: Stephanie Tuell and her wife Lulu of Haverhill, MA; Stephen Dawe and his wife Melanie of Camden County, GA; Samantha Mack and her husband Jason of Haverhill, MA, her siblings: Darryl Dotson of Portland, ME; Gregory Dotson of Methuen, MA; and Michael Dotson and his wife Mary of Gorham, ME. She is sadly going to be missed by her grandson Joey Porter Jr. of Lawrence, MA; her grand-puppy Colby of Haverhill, MA, several nieces, nephews, and by her “adopted” grandchildren. Calling hours will be from 4-8p on Friday, March 4th, 2022, at the Kenneth H. Pollard Funeral Home, 233 Lawrence Street, Methuen, MA. In lieu of flowers, family is asking for balloons instead.

Sheila G. (Dotson) Piazza, age 59 of Methuen, MA passed away peacefully on February 26th, 2022, with her loving family by her side. Sheila was born in Cleveland, Ohio on August 23rd, 1962, and moved to Massachusetts during her adolescence years.... View Obituary & Service Information

The family of Sheila G. Piazza created this Life Tributes page to make it easy to share your memories.