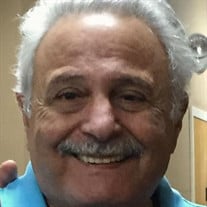 Seabrook, NH – Shae A. Baddour, 79 of Seabrook, NH, passed away Monday, May 27, 2019 at his home. He was the beloved husband of Marie (Teti) Baddour. Born in Lawrence on February 15, 1940, he was the son of the late Albert and Alice (Hashem) Baddour. Shae was a loquacious story teller and fondly remembered his childhood. He was a proud graduate of Central Catholic High School, Class of 1958 and as a student athlete was part of the 1958 Central Catholic High School undefeated state champion basketball team. After graduating from high school, he enlisted in the United States Navy and was chosen to serve as the Recruit Chief Petty Officer during his boot camp experience. He served honorably as an electronic technician on the USS Hailey Destroyer, DD 556. After his honorable discharge from the Navy, he worked at Raytheon before becoming a Methuen Police Officer. He rose to the rank of Sargent and was instrumental in bringing the Jaws of Life and bullet proof vests to his fellow officers. He received numerous commendations from the city for his bravery and valor. He served at different times in his career as a crime scene photographer, detective, accident reconstructionist, CPR/first aide instructor, fire arms instructor, defensive tactics instructor, training coordinator and field training officer. He was a proud member of the Methuen Police family and the past vice president of the Methuen Police Retirement Association. He also served as the past President of the Italian American Police Officers Association. Throughout his time on the police department, he was active in his community. He organized fundraising events for the Jerry Lewis Telethon, actively participated in the Knights of Columbus and many other local and national organizations. He was a firearms expert for the Commonwealth of Massachusetts and testified throughout the country on firearms safety. Upon his retirement, he spent a lot of time on a golf course. He toured the country and took full advantage of the opportunities afforded him. Whether on the golf course, snow mobile trail or behind the wheel of a RV, he was quick to tell a joke and never shied away from giving his opinion on the topics of the day. Shae leaves his wife of 31 years, Marie Baddour; his sons, Shae Baddour and former Senator Steven Baddour and his wife Ann all of Methuen; sisters, Bertie (Shehdan) and Jeanette (DiStefano) of Raleigh, NC and their husbands, Philip and Robert; brother-law Moses Ward of Chelmsford; stepson, Mark Nalbandian; stepdaughter, Victoria (Kramar) Nalbandian of Salem, NH; 5 grandchildren, Matthew Baddour, Nicole Baddour, Shaena Baddour, Isabella Baddour and Victoria Baddour; step grandchildren, Lazzarus Kramar, Zachary Kramar, Christian Kramar, Noelle Nalbandian Doucette and Candice Nalbandian; along with several cousins, nieces, nephews, and his former spouse, Phyllis (Pisano) Baddour. He is predeceased by his sister, Mariam (Ward) Baddour. Family and friends will honor and celebrate Shae’s life by gathering for his calling hours on Thursday, May 30, 2019 from 4 – 8 PM at the Kenneth H. Pollard Funeral Home, 233 Lawrence Street, Methuen. His funeral service will be held at 11 AM on Friday at the funeral home. Burial will be private and at the convenience of the family. In lieu of flowers, memorial contributions can be made to the Methuen Police Retirees Association, 90 Hampshire Street, Methuen, MA 01844. To leave an online condolence, please visit www.pollardfuneralhome.com. The Kenneth H. Pollard Funeral Home is honored to serve the Baddour family.

The family of Shae A. Baddour created this Life Tributes page to make it easy to share your memories.