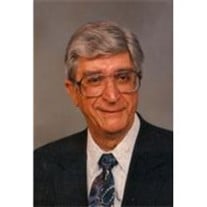 Sun City, Arizona - Santo (Sam) P. Sammataro, 88, died peacefully with his family by his side at the Hospice of the Valley in Arizona. Mr. Sammataro was born in Lawrence, Ma. September 25, 1925, the son of Frank and Rose (DeFrancesco) Sammataro. He and his wife and best friend Nancy had lived in Derry, NH for many years before moving to Arizona in 2003 to be near his daughter and family. While residing in the Lawrence area, he received his education in the Lawrence school system. For many years, Sam was employed as an auditor with the Internal Revenue Service, and worked at Raytheon in Andover/Bedford before retiring and moving with his wife to Sun City. During World War II, Mr. Sammataro served his country in the United States Army as a Rifle Marksman before his honorable discharge at war?s end. Sam enjoyed Scrabble and crosswords, loved a good joke, and enjoyed reading, traveling, and playing the clarinet. He was an avid golfer and a Civil War buff. Most of all he treasured time with his family. Survivors include his wife of 44 yrs. Nancy (Morin) Sammataro, and children: Robert Sammataro of Alabama, daughters Pamela & her husband Francis Fox of Methuen; Gail and husband Chris Block of Glendale, AZ; brothers George and wife Joan Samataro of Salem, NH; and Francis and wife Mari Samataro of Alabama; sister Kathleen and her husband Gus Reres of New Jersey, 7 grandchildren, 8 great-grandchildren and several nieces and nephews. Santo was predeceased by his daughter Carol Harris, who died in 1997. Friends will be warmly received on Tuesday, December 10, from 10-12 PM at the Kenneth H. Pollard Funeral home. A funeral service will follow at 12 o'clock at the Kenneth H. Pollard Funeral Home, 233 Lawrence Street in Methuen, with burial to follow in the Immaculate Conception Cemetery of Lawrence. In lieu of flowers memorials may be made to Hospice of the Valley, North Sun City, 17225 Boswell Blvd., Sun City, Arizona 85373 or hov.org.

Sun City, Arizona - Santo (Sam) P. Sammataro, 88, died peacefully with his family by his side at the Hospice of the Valley in Arizona. Mr. Sammataro was born in Lawrence, Ma. September 25, 1925, the son of Frank and Rose (DeFrancesco) Sammataro.... View Obituary & Service Information

The family of Santo (Sam) P. Sammataro created this Life Tributes page to make it easy to share your memories.