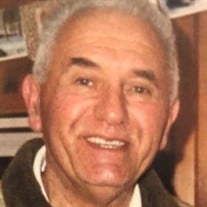 Salvatore “Sal” Anthony Coco, 83, longtime resident of Methuen, passed away on October 7, 2019 at Holy Family Hospital in Methuen, surrounded by his loving family. Born on February 3, 1936 in Lawrence, MA to the late Anthony and Mary (Incropera) Coco, he was raised and educated in Methuen. After graduating with the Class of 1954 from Tenney High School, Sal attended Tilton College. Like so many of his generation he felt the call of duty and enlisted in the United States Army. A Vietnam Era veteran, Sal served with pride and was honorably discharged after five years of faithful service. Continuing his call to service, he served the community of Lawrence as a police officer for twenty five years until his retirement. Sal was a devout Catholic and was a communicant at Saint Monica’s Parish. As the patriarch of his family, Sal was a devoted family man, who enjoyed the many quiet pleasures of life. He loved preparing simple meals with his family, trips to the casino with his beloved bride and had and took immense pleasure from gardening. A man who had a creative flair to him, Sal enjoyed writing poetry, sharing his passion with his family and even had his poetry published. He touched many lives in many different circles and will fondly be loved, cherished and missed by all. Sal is survived by his two children; his daughter, Kimberly Coco, and his son, Darren Coco and his wife Shelley, all of Methuen. He was the grandfather to his six grandchildren; Jessica, Kendra, Kyle, Amanda, Dustin and Darren Jr, and was the great-grandfather of three. In addition to his parents, Sal was preceded in death by his loving wife, Virginia K. (Bartose) Coco in 2010 and his son Anthony Coco. Visitation for Sal will be held on Wednesday, October 16, 2019 from 9 – 11 AM at the Kenneth H. Pollard Funeral Home, 233 Lawrence Street, Methuen. Friend and family are cordially invited to attend. A funeral service will be held at the conclusion of calling hours at the funeral home. Entombment will be held at Saint Mary Immaculate Conception Cemetery and Mausoleum, 29 Barker Street, Lawrence. In lieu of flowers, please consider a donation in Sal’s memory the MSPCA at Nevins Farm, 400 Broadway, Methuen, MA 01844. The Kenneth H. Pollard Funeral Home is proud to serve the Coco family.

Salvatore &#8220;Sal&#8221; Anthony Coco, 83, longtime resident of Methuen, passed away on October 7, 2019 at Holy Family Hospital in Methuen, surrounded by his loving family. Born on February 3, 1936 in Lawrence, MA to the late Anthony and... View Obituary & Service Information

The family of Salvatore Anthony Coco created this Life Tributes page to make it easy to share your memories.