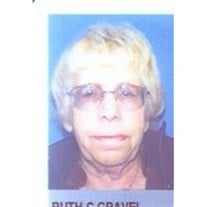 Rochester, NH ? Ruth C. ?Nonie? (Carson) Gravel, of Rochester, NH, formerly of Methuen, MA and Pelham, NH, 69, died peacefully Tuesday April 17, 2007 at Frisbie Memorial Hospital in Rochester. ?Nonie? was born January 18, 1938 in Lawrence, MA. She was the only child of the late William J. and Monica A. (Collins) Carson. A 1956 graduate of Lawrence High School, Nonie worked for New England Telephone, then later as secretary for St. Laurence O?Toole Church, and later as director of the St. Mary- Immaculate Conception Cemetery?s in Lawrence. She was a devout Catholic who practiced her religion with an unfailing love. During her years at St. Laurence?s she enjoyed many aspects of Church life. She worked with the youth of the CYO; was a member of the CIP School Committee, ?captioned her Bingo team, bowled in the church-sponsored league, and square danced with the Calico Steppers. She enjoyed traveling and being near the ocean. She was always up for a game of 45?s or a trip to Foxwoods and was a competitive Scrabble player. But her most treasured time was the time spent with her family. Nonie is survived by her loving and devoted husband Gerald ?Jerry? Gravel of Rochester, with whom she would have celebrated 49 years of marriage on April 19th. She is also survived by a son Michael W. Gravel of Taos, New Mexico, and a daughter Patricia A. and her longtime companion Jonathan G. Broff of Kittery, Maine, additionally, she will be very much missed by her brother-in-law and his wife Robert J. and Mary L. Gravel of North Andover, Ma. a sister-in-law and her husband Olive S. and William Davison of Milford, NH; one aunt, and numerous nephews, nieces, and cousins. A funeral mass will take place on Saturday morning at 9 o?clock in St. Monica?s Church Methuen with burial to follow in the Immaculate Conception Cemetery in Lawrence. Friends may call on Friday from 3-5 & 7-9 P.M. at the Kenneth H. Pollard Funeral Home, Inc. 233 Lawrence Street of Methuen. Memorial contributions may be made to Seacoast Hospice 642 Central Avenue Dover, NH 03820.

The family of Ruth C. "Nonie" Gravel created this Life Tributes page to make it easy to share your memories.