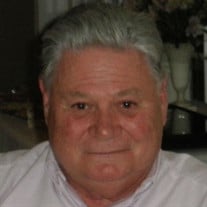 Russell Thornton passed away peacefully on November 16, 2017 in the care of his devoted wife Mona and the comforting care at High Point Hospice House after a short difficult battle with cancer. Russell was a proud Marine, quality builder and world traveler, with lifelong roots in the Merrimack Valley. His loving wife Mona worked with him for over 50 years. They most recently celebrated their 58th wedding anniversary on October 24th, enjoying their favorite fried seafood and a cold beer. Russell was born on January 20, 1936 in Lawrence, MA, son of Wilfred and Irene (Robidoux) Thornton. He was raised in Andover MA and graduated from Punchard High School. After high school, he worked in home construction for 30 years and formed his own company Russell Thornton Builder. He was known for his attention to detail and demanded quality work from those who worked for him and with him. Russell served in the US Marine Corp reserves for six years. The skills and training he learned were an important part of how he lived his whole life. In the following 30 years, Russell embarked on a second career to pursue his passion for travel. He eventually owned and operated Great Adventures Travel in Salem, NH, with his wife Mona working by his side. He took pride in running his own business offering the best value travel services and exceptional customer service. He enjoyed sharing his own travel experiences with clients and family. He travelled throughout the US, Canada, Mexico and Europe. He visited Israel and exotic destinations Tahiti, Australia, Hong Kong, and Japan. Some of his favorite and most enjoyable memories were vacations throughout the Caribbean Islands, including on cruise ships and sailing excursions. He retired from the travel business in 2007 and enjoyed spending time along the local seacoast, Ogunquit was a favorite spot. Russell is survived by his wife of 58 years, Mona (Bilodeau) Thornton of Lawrence, MA and three children: Susan (Thornton) Beiswenger and her husband Gary of Londonderry, NH; Barry Thornton and his partner Julie Reardon of Methuen, MA; and Cheryl (Thornton) Davis and her husband Lee of Lawrence, MA. Russell loved to share his advice on life with his five grandchildren: Jason Beiswenger and wife Jocelyn of Manchester NH; Eric Beiswenger of Amherst, NH; Barry Thornton of Methuen, MA; Mandi Thornton of Santa Monica, CA; and Kyle Davis of Lawrence, MA. Russell is also survived by his sister Fay Fitzgerald of Ogunquit, ME and brother Robert Thornton and his wife Eilleen of Methuen, MA. Arrangements: Family and friends may call on Tuesday, November 21, 2017 from 4:00 – 6:00 pm at Kenneth H. Pollard Funeral Home, 233 Lawrence St, Methuen, MA 01844. All are invited to join the family for a Catholic funeral service at the funeral home immediately following the calling hours at 6:00 pm. Burial will be private at a later date. In lieu of flowers, in keeping with Russell’s love of all things Christmas, donations can be made in his memory to Marine Corp Toys for Tots www.toysfortots.org or by bringing joy to those suffering from serious illness with donation to: Make a Wish NH chapter, 814 Elm St, Suite 300, Manchester, NH 03101-2230, web site nh.wish.org. The Kenneth H. Pollard Funeral Home is honored to serve the Thornton family.

Russell Thornton passed away peacefully on November 16, 2017 in the care of his devoted wife Mona and the comforting care at High Point Hospice House after a short difficult battle with cancer. Russell was a proud Marine, quality builder and... View Obituary & Service Information

The family of Russell W. Thornton created this Life Tributes page to make it easy to share your memories.