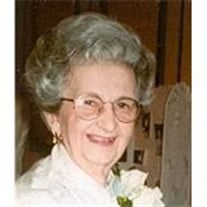 WINDHAM, NH ? Rose M. (Ciardello) Crucius, age 92 died Sunday October 14, 2007 at Salem Haven Nursing Home in Salem, NH. Born and educated in Lawrence, she was a graduate of Lawrence High School. She and her husband later came to Windham, NH to help establish the Windham Playhouse under the direction of A. E. Austin. After the closing of the playhouse, she worked for A.B. Sutherland?s and Howland,s Department Stores. At the end of her career, she volunteered at the Holy Family Hospital Gift Shop and retired at 85 years old. Rose was a 58 year resident of Windham, where she was a a founding participant in the building of St. Matthew?s Church and later became the guild president. She was the President of the Windham Women?s Club and also a member of the Windham Knitting Club. Rose's greatest joy in life came from being surrounded by family and friends. She leaves her husband of 70 years, Herbert O. Crucius of Windham, NH, her children Carolyn J. White of Methuen, MA and Elaine Moynihan of East Hampstead, NH and William H. and his wife Jayne B. Crucius of Windham, NH and the late Judith and Mary Crucius, brother Michael Ciardello of Lawrence, MA, 7 grandchildren, 8 great-grandchildren and many nieces and nephews. ARRANGEMENTS: Memorials can be made to Advantia Hospice, I.E. Commons Drive Unit #31, Londonderry, NH 03053 or to Salem Haven Nursing Home Staff Appreciation Services 23 Geremonty Drive Salem, NH 03079. Family and friends may call on Wednesday from 4:00p.m. ? 8:00p.m. Funeral Mass will be celebrated on Thursday at 10:00a.m. at St. Matthew?s Church, Windham, NH. Burial will follow in the Cemetery on the Hill also in Windham, NH.

The family of Rose M Crucius created this Life Tributes page to make it easy to share your memories.