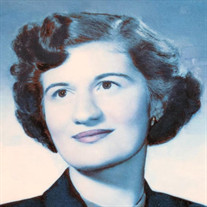 Rosalind (George) Hajjar passed away peacefully in Hudson, NH on October 24, 2020. Born on February 3, 1924 in Maasser el Chouf, Lebanon, she was the eldest daughter of the late Louis and Eva George of Springfield, MA. She was also the loving wife of Philip D. Hajjar for 58 years until his death in October 2008. Rosalind (Roz) lived in Lebanon for almost three years, then spent three additional years in Adelaide, Australia. In 1930, her family initially settled in North Adams, MA, and then West Springfield, MA. She graduated from West Springfield High School in 1941, and then graduated from the State Street Business School in Springfield, MA in 1943, majoring in Accounting. She worked at the Remington Advertising Agency from 1943-1950 in Springfield. Married to Philip Hajjar from Lawrence, MA in 1950, she soon became employed at the Holy Family Hospital (Bon Secours Hospital) in Methuen, MA from 1950-1986 where she started the Data Processing Center and then managed the Accounts Receivable Department. In 1986, she retired, and then spent her remaining years caring for her family, playing bridge and occasional golf, and traveling with her many friends and family. Roz leaves her son, Dr. David Hajjar, and his wife Dr. Katherine Hajjar of New York City; and, two daughters, Nadine Small and her husband Mark Small of Pelham, NH; and Patricia Clark and her husband Craig Clark of Hudson, NH; five grandchildren, Kate, Amanda, Ashleigh, Codi and Chase; one great granddaughter, Nora; and many nieces and nephews. She is also survived by her sister, Mary G. Howie of East Greenwich, RI. She was pre-deceased by her husband, two brothers, Joseph and Michael George, and sister, Freda G. Sadak. Roz will be profoundly missed by her family and the very wide circle of people whose lives she touched. At the request of the family, the funeral ceremony will be private. In lieu of flowers, memorial contributions may be made in Roz’s name to St George Antiochian Orthodox Church, 44 Bowers Street, Lowell, MA 01854. To send an online condolence to Roz’s family, please visit www.pollardfuneralhome.com. The Kenneth H. Pollard Funeral Home, 233 Lawrence Street, Methuen is honored to serve the Hajjar family.

Rosalind (George) Hajjar passed away peacefully in Hudson, NH on October 24, 2020. Born on February 3, 1924 in Maasser el Chouf, Lebanon, she was the eldest daughter of the late Louis and Eva George of Springfield, MA. She was also the loving... View Obituary & Service Information

The family of Rosalind Hajjar created this Life Tributes page to make it easy to share your memories.