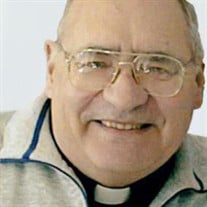 Born on October 24, 1931 in Lawrence, Massachusetts, Father Roland Henry Lacasse, S.M. died on May 11, 2020 at the age of 88 from complications of COVID-19 at the Nevins Manor, Methuen. He was predeceased by his parents, Wilfred and Eva (Ouellette) Lacasse and his younger sister, Lauraine Nadeau. Fr. Roland is survived by his elder brother, Rev. M. Eugene Lacasse, OCSO, his younger sister Doris (Paul), Bitler, by five beloved nieces and nephews, Kathleen, Cynthia, Christine, Stephen and Michael, and many grandnephews and grandnieces. Father Roland loved being a priest. His profound faith was first nurtured by the deep Catholic faith of his parents, especially that of his mother Eva. When he was six years old his father died suddenly and left his mom with four small children to raise alone. Her example and that of the Good Shepherd Sisters, the Marist Brothers and Marist priests who educated him at St. Anne's Parish in Lawrence are probably the reason that his brother Eugene and he both became priests. When he applied to Maryvale Seminary in Bedford, Massachusetts and was asked why he wanted to become a priest he wrote, "To help people to be happy and holy" - a goal that he achieved "in spades" as his many surviving relatives, loyal friends, and former parishioners will attest. Ordained to the priesthood on February 2, 1960, the first of Father Roland's many assignment included secondary education at Marist schools in Michigan, New York and Maine, and then as a chaplain at the Massachusetts General Hospital in Boston. Following that he was sent to serve as a curate and then as pastor in seven different parishes in Massachusetts, Maine and Vermont. He was a great homilist and would sometimes sing part of a song to illustrate the meaning of a Scripture passage. Commenting on the problem of suffering, for instance, he would sometimes sing a verse of "I Never Promised You a Rose Garden." Fr. Roland was a great writer. Every month for five years he wrote a letter to the editor of the Lawrence Eagle Tribune. This developed into a weekly column called "Insight" and became a very popular item that included Fr. Roland's inspiring reflections on the deeper meaning hidden in the ordinary events of life. The last phase of his ministry was served as a member of the Marist community at the Lourdes Center in Boston, helping to organize pilgrimages to Lourdes, answering letters from the sick, and writing a bimonthly column, "Marist Guidance" for "Echoes from Lourdes". At that time it was circulated bi-monthly to 50,000 readers in the US and Canada. It was a faith-filled, uplifting column, sprinkled with stories from his own experience and encouraging readers to take Jesus and Mary seriously, and themselves not so much. Finally, in failing health, Fr. Roland retired to the Nevins Manor in Methuen, MA. From there he continued a huge correspondence with family and friends. Because of his sunny disposition he brought joy to any gathering at the Nevins. His family and the Marists are thankful for the skilled and compassionate care that he received there. Services for Fr. Roland are private. Interment will be at Sacred Heart Cemetery, Andover, MA. Mass and a mercy meal will be held at a later date. In lieu of flowers Fr. Roland requested that donations be sent to Marist Ministries, The Lourdes Center, 698 Beacon Street, Boston, MA 02215. For online guestbook, please visit the funeral home website, www.pollardfuneralhome.com. The Kenneth H. Pollard Funeral Home is honored to serve the Lacasse Family and Marist Fathers.

Born on October 24, 1931 in Lawrence, Massachusetts, Father Roland Henry Lacasse, S.M. died on May 11, 2020 at the age of 88 from complications of COVID-19 at the Nevins Manor, Methuen. He was predeceased by his parents, Wilfred and Eva (Ouellette)... View Obituary & Service Information

The family of Fr. Roland Henry Lacasse, S.M. created this Life Tributes page to make it easy to share your memories.