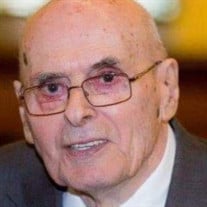 Roger Eugene Morency, 92, of Salem, NH, former longtime resident of Lawrence, passed away peacefully on April 4, 2020 at the High Pointe House in Haverhill. Born in Methuen on July 26, 1927 to the late Arsene and Lucia Morency, he graduated from the Edward F. Searles High School with the Class of 1945. Like so many of the greatest generation, Roger honorably served his country in the US Army. Following his discharge from the service, he went on to join his father in operating the family business, Morency's Market, where he could be found behind the butcher block. After selling the business in 1971, he continued his career as a food broker until retirement. Roger was a man whose devotion to his family was the focal point of his life. He was a lifelong devout Catholic and was a communicant at St. Patrick's Parish for decades. His familiar smile could be seen while working on many of the parish's different projects or as an usher at Sunday morning mass. Roger was a humble and selfless man with a constant, positive outlook on life, who gave generously to all. He most enjoyed spending time with his family, whether working on his home or around the yard or enjoying the family pool. Roger touched many lives throughout the years, and he will be loved, cherished and missed by all. With a love story that began over 70 years ago, Roger is survived by his wife Felice (Buote) Morency of Salem, NH and his four beloved children; his daughter Cynthia Morency of Andover, his son Steven Morency & his wife Joyce of Lawrence, his daughter Kathleen Morin & her husband James of Salem, NH and his daughter Christine Morency of Bradford. He is also survived by his five grandchildren; Jennifer, Kristin, Nicole, Matthew and Ashley. Roger was also a proud great-grandfather to Mia, Zoey, Saverio and Cole. He is also survived by his siblings; his sister Helene DeCourcey of Maine, his sister Estelle Taylor of Sandown, NH, his brother Richard Morency of Rochester, NY and his sister Gloria St. Jean of Litchfield, NH, and many nieces and nephews. In addition to his parents, he was preceded in death by two brothers and five sisters. To honor Roger's wishes all services were privately held. A memorial mass will be scheduled at a later date. The Morency family would like to personally thank the staff of the Merrimack Valley Hospice for their unwavering kind and compassionate care. In lieu of flowers, please consider making a contribution in Roger's memory to the MSPCA at Nevins Farm, 400 Broadway, Methuen, MA 01844. To leave an online condolence, please visit www.pollardfuneralhome.com. The Kenneth H. Pollard Funeral Home is proud to serve the Morency family.

Roger Eugene Morency, 92, of Salem, NH, former longtime resident of Lawrence, passed away peacefully on April 4, 2020 at the High Pointe House in Haverhill. Born in Methuen on July 26, 1927 to the late Arsene and Lucia Morency, he graduated... View Obituary & Service Information

The family of Roger E. Morency created this Life Tributes page to make it easy to share your memories.