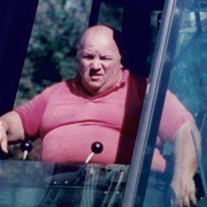 Roger Paul “Butch” Michaud Sr, 75, lifetime resident of Methuen, passed away at Lawrence General Hospital on December 26, 2019 surrounded by his devoted family. Born on January 17, 1944 to the late Peter P. Michaud and Ida (Drouin) Garafolo, he attended Methuen schools. Butch was a member of Local #4 and worked as a heavy equipment operator for Brox Construction and several other construction companies until his retirement. A devoted and selfless family man who enjoyed the many simple pleasures of life, he had a fondness for animals, trucks and heavy equipment. Butch touched many lives in many different circles and will fondly be loved, cherished and missed by all. Butch could always be found behind the wheel of a bulldozer, excavator, tractor or some type of heavy equipment whether it be for work or fun. Digging ditches, trenches, ponds or swimming pools, if there was a hole that needed to be dug, he was your man. He was the father of two, and from the moment those kids where born there was a pile of dirt or snow for them to climb or slide down. He was a son, brother, husband, father, uncle, and grandfather. Known as Butch to many for most of his life, he was also called “Pa” when his grandsons & his great-grandson were born. A man of few words, he would be the quiet one sitting with his hands folded across his chest studying his surroundings. Butch is survived by his beloved bride, Josephine Teresa (Andrews) Michaud, also of Methuen, with whom he entered into wedded bliss on February 9, 1964 and celebrated 55 years of marriage together. He was the dear father to his son, Roger Michaud Jr and his wife Sandra Marie of Methuen and his daughter, Audrey DeProspero and her husband Bob of Lyndonville, VT. Butch was the proud grandfather to his two grandchildren, Marc and Alec Michaud and his great-grandson Kayden Michaud. He is also survived by his sister Beverly Clark of Southport, NC, and his brother John F. Garafolo and his wife Jackie of Berwick, ME. In addition to his parents, he was preceded in death by his sister Doris Michaud, his brother-in-law John Clark, and his step-father John Garafolo. Visitation for Butch will be held on Thursday, January 2, 2020 from 4 – 8 PM at the Kenneth H. Pollard Funeral Home, 233 Lawrence Street, Methuen. Friends and family are cordially invited to attend. A funeral service will be held on Friday, January 3, 2019, 11 AM at the funeral home with Fr. Christopher Casey officiating. Interment to follow at St Mary Immaculate Conception Cemetery, 29 Barker Street, Lawrence. To leave an online condolence, please visit www.Pollardfuneralhome.com. The Kenneth H. Pollard Funeral Home is proud to serve the Michaud family. In lieu of flowers, please consider a donation in Roger’s memory to the MSPCA at Nevin’s Farm, 400 Broadway, Methuen, MA 01844

The family of Roger Paul "Butch" Michaud Sr created this Life Tributes page to make it easy to share your memories.