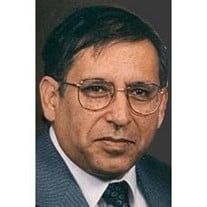 No. Smithfield, RI- Rodolfo A. Urbina, formerly of Derry, NH, died Thursday July 1st, at the Golden Crest Nursing Home in RI, following a long and courageous battle with Parkinson?s disease. Born in Juarez, Mexico, Rodolfo was the son of Rodolfo A. and Felicitas (Alba) Urbina. Educated in the United States, Mr. Urbina was an Engineer who traveled around the country with his family. His most recent job at Texas Instruments, led him to Rhode Island. Rodolfo will be deeply missed and remembered in the hearts of his wife, Denise (Binette), his children, Rodolfo Urbina of Houston,TX, Alyssa Moschetto of Orlando, Fl and Kaitlyn Urbina of North Smithfield, RI. He is also survived by his 3 grandchildren, Tyler, Yandel, and Arielis, his 2 sisters Mara Urbina and her husband David Lodge of San Diego, CA and Maria Louisa Ruiz and her husband Rafael of El Paso, TX, his mother in-law, Jeanne Binette of Salem, NH as well as several nieces and nephews. ARRANGEMENTS: Relatives and friends may pay their respects on Thursday morning July 8th from 9:30 to 11:30 with a Mass of Christian Burial to take place at 12 noon at St. Josephs Church in Salem, NH with burial to follow at Elmwood Cemetery in Methuen. Donations in Rodolfo?s name may be made to the Parkinson?s Disease Foundation 1359 Broadway, Suite 1509 New York, NY 10018.

The family of Rodolfo A. Urbina created this Life Tributes page to make it easy to share your memories.

No. Smithfield, RI- Rodolfo A. Urbina, formerly of Derry, NH,...