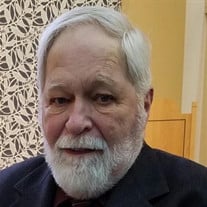 Dracut – Robert J. Talbot, Sr., 75 of Dracut, passed away at the Lowell General Hospital, Saints Campus on Friday, September 22, 2017. He was the beloved husband of Linda S. (Gilpatrick) Talbot, to whom he was married for 41 years. Robert was born in Lawrence on July 31, 1942, the son of Louis Guilford and Yvonnette (Beaudoin) Talbot-Guilford. He graduated from Haverhill Trade School and proudly served his country in the U.S. Army. He worked as a manufacturing engineering technician at Vicor Corporation in Andover until his retirement. Robert was also a member of the American Legion Post 122 in Methuen and the American-Canadian Genealogical Society in Manchester. In his free time, he loved spending time with his family, especially his grandchildren. He never missed a family birthday. He loved to tease his family and friends, however. Robert will be deeply missed by his wife, Linda; 6 children, Scott Talbot and his wife, Vicki, of Wilson, NC, Karen Sutton and her husband, Matthew, of Camden, ME, Shawn Talbot and his wife, Daylynn, of Haverhill, MA, Robert Talbot, Jr. of Fitchburg, MA, Kelly Curtin and her husband, Josh, of Dracut, MA, and Sherri Talbot of Dracut, MA; 9 grandchildren, Alexander, Axel, Britney, Caila, Avery, Cody, Logan, Hailey, and Lucas; 2 great grandchildren; his sister, Pauline Coppola of Salem, NH; his sister-in-law, Donna Talbot of Bradford; and several nieces and nephews. He is predeceased by his brother, Richard. Family and friends will honor and celebrate Robert’s life by gathering for calling hours at the Kenneth H. Pollard Funeral Home, 233 Lawrence Street, Methuen on Tuesday, September 26, 2017 from 4 – 8 PM. His Mass of Christian Burial will take place at St. Monica’s Church, 212 Lawrence Street, Methuen on Wednesday at 11 AM. Burial will follow in Walnut Grove Cemetery in Methuen. In lieu of flowers, memorial contributions may be made to the charity of one’s choice. For directions or to send an online condolence to Robert’s family, please visit www.pollardfuneralhome.com. The Kenneth H. Pollard Funeral Home is honored to serve the Talbot family.

Dracut &#8211; Robert J. Talbot, Sr., 75 of Dracut, passed away at the Lowell General Hospital, Saints Campus on Friday, September 22, 2017. He was the beloved husband of Linda S. (Gilpatrick) Talbot, to whom he was married for 41 years. Robert... View Obituary & Service Information

The family of Robert J. Talbot Sr. created this Life Tributes page to make it easy to share your memories.