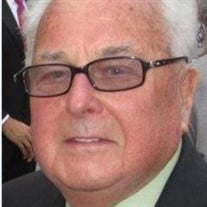 METHUEN | Robert H. McGonigle, 93, of Methuen, passed away on May 15 at Bear Mountain at Andover . Born June 17, 1926, Robert was raised in Lawrence and graduated from Lawrence High School in 1944, he was the son of the late Ethel(Mutch) McGonigle and Hugh Mcgonigle. Immediately after graduation, Robert enlisted in the Navy to support the war effort during World War II. After the war, Robert married Barbara Ann Donohue, and the two settled in Methuen and raised five children. He built a successful career in auto sales, working for Arlington Motors and later for Park-Hagerty Porsche Audi Inc. in Lawrence before retiring in the early 1990s. Robert loved to travel. Whether it was cruising the Caribbean, basking on the beaches of Aruba, visiting family across America, or taking his grandsons to the Cooperstown, N.Y., Baseball Hall of Fame, Robert found greatest joy on adventures with loves ones. And wherever he would go, he would bring his boisterous personality and sharp sense of humor, making him the life of every party and a constant source of laughter and comfort. That radiant personality and the laughter it brought will be sorely missed. When not traveling, Robert enjoyed watching and listening to Boston sports, especially the New England Patriots. He also liked watching NASCAR and golf and working on home improvement projects. Robert was an active member of the Knights of Columbus Methuen Council 4027. Robert was preceded in death by his wives Barbara Ann (Donohue) McGonigle and Barbara Lillian (Ciras) McGonigle; his daughter Patricia Ann McGonigle; and his sister Ethel (Mcgonigle) Fengya. He is survived by his daughter Linda (McGonigle) Saitta and her husband Daniel of Dracut; his sons Robert McGonigle and his wife Carol of Tucson, Ariz., David McGonigle and his wife Adelia of Rochester, N.H.; Gary McGonigle of Methuen; step-daughters Karyn Williams and Doris Titone of Haverhill; grandchildren Lee Canzano of Sandown, N.H.; Candice Richardson of Salem, N.H., Sean Dugan of Newburyport, Bryan McGonigle of Derry, N.H., and Timothy Saitta of Dracut; and many step-grandchildren, great-grandchildren, nieces and nephews. Services will be private at a later date. In lieu of flowers, please make memorial donations to the American Cancer Society, 3 Speen St., Framingham, MA 01701. The Kenneth H. Pollard Funeral Home is proud to serve the McGonigle family.

METHUEN | Robert H. McGonigle, 93, of Methuen, passed away on May 15 at Bear Mountain at Andover . Born June 17, 1926, Robert was raised in Lawrence and graduated from Lawrence High School in 1944, he was the son of the late Ethel(Mutch) McGonigle... View Obituary & Service Information

The family of Robert H McGonigle created this Life Tributes page to make it easy to share your memories.