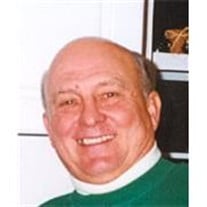 Atkinson, NH ? Robert L. ?Bob Rosey? Rosentrater 76 passed away peacefully on Saturday November 13, 2010 surrounded by his family. Bob was born on August 13, 1934 in Warren, PA to Robert L. and Lillian (Leonard) Rosentrater. He served in the United States Army during the Korean Conflict and was honorably discharged. Bob retired from National Grid after 37 years of dedicated services, and continued to work as a contractor for National Grid until his illness would no longer allow him. He was actively involved in the community, before moving to Atkinson, NH, residing in Methuen for many years. He was one of the founding fathers of the Methuen Youth Hockey Program and also coached the Methuen Youth Little League. Although Bob could not skate, he worked tirelessly in the 70?s to ensure the Town of Methuen included an ice rink as part of the plans of building Methuen High School. Bob will be remembered as a person who always found time for his family, friends and neighbors. He was never to busy to help a friend or neighbor. He could repair anything. He enjoyed his garden and got great pleasure out of giving the fruits of his labor to anyone that enjoyed a fresh vegetable. He enjoyed the ?Tuesday? breakfast club with other retirees from National Grid. When Bob wasn?t gardening or repairing something for a friend, he enjoyed reading and the people and time spent at the Kimball Library in Atkinson, NH. He will be sadly missed by everyone who knew him. He is survived by his wife of 54 years Patricia A. (Riley) Rosentrater of Atkinson, NH. Sons Robert L. Rosentrater, III and his wife Donna of Haverhill, MA, Michael J. Rosentrater and his wife Lynne of Milton, GA and Scott C. Rosentrater and his wife Holly of Salem, NH. Sister Karen Johnson and her husband Roger of Jamestown, NY. In-laws James W. Riley, Jr., Mary Jane Taylor and Dorothy Chadwick. Grandchildren Ashely and her husband Andy Simonds of Orlando, FL, Emily of Haverhill, MA, Lindsay of Milton, GA, Robbie and Jacob of Salem, NH. Great-grandchild Janie Caroline of Orlando, FL many devoted nieces and nephews. Bob was pre-deceased by his brother Richard Rosentrater. ARRANGEMENTS: In lieu of flowers memorials can be made to Merrimack Valley Hospice 360 Merrimack Street BLDG 9 Lawrence, MA 01843 or to the Kimball Library, Atkinson, NH. Family and friends may call on Wednesday from 4:00p.m. ? 8:00p.m. Funeral services will be held on Thursday at 10:00a.m. at the funeral home with burial to follow in the Elmwood Cemetery in Methuen.

Atkinson, NH ? Robert L. ?Bob Rosey? Rosentrater 76 passed away peacefully on Saturday November 13, 2010 surrounded by his family. Bob was born on August 13, 1934 in Warren, PA to Robert L. and Lillian (Leonard) Rosentrater. He served in the... View Obituary & Service Information

The family of Robert L. Rosentrater created this Life Tributes page to make it easy to share your memories.