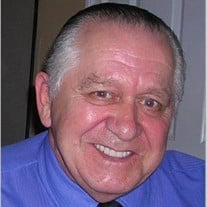 Robert D. Freitas, age 79 passed away peacefully on November 8, 2020. Robert was born in Lowell on January 26, 1941 to the late John and Mary (Pimental) Freitas. He enjoyed tinkering with electronics and computers, fishing, gardening, spending time with his grandchildren, and spending time near the ocean. Robert was a lover of music and at one time preformed with Mike and the Frogs. He was employed as a truck driver, construction worker and barber. Robert was the beloved husband of the late Joyce (Eastwood) Freitas. He is survived by his children Saundra Goodwin, Catherine Schrowang, Rosemarie Chretien, Susan Thomson, Lisa Augusta, the late Deborah Daughraty, the late Priscilla Freitas, the late Robert McCarthy Jr. and the late Joseph Chretien Jr. He was the loving grandfather of Melissa Taylor, Paul Taylor, Felicia Daughraty, Kevin Goodwin, Colleen Schrowang, Christa Schrowang, Casey Noetzel, Abigail Noetzel, David Thomson IV, Kelsey Thomson, Emily Augusta, Kristen Augusta, the late Carl Taylor, the late Robert McCarthy III, and the late Tiffany Zellin. He was the great-grandfather of 4. Robert is also survived by his brother John Freitas and his wife Patricia and brother in-law John Eastwood and his wife Katherine. A graveside service will be held on Friday, November 13, 2020 at 11:00 AM at Elmwood Cemetery of Methuen. Due to the ongoing global pandemic, and current state regulations, it is required that facial coverings be worn and social distancing must be observed. For directions and online guestbook, please visit the funeral home website, www.pollardfuneralhome.com. The Kenneth H. Pollard Funeral Home is honored to serve the Freitas Family.

The family of Robert D. Freitas created this Life Tributes page to make it easy to share your memories.