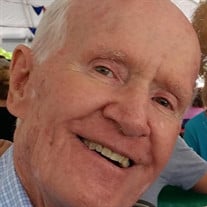 Lawrence - Robert J. Cassidy, 89 of Lawrence, passed away on Sunday, December 16, 2018 at Mary Immaculate Nursing/Restorative Center in Lawrence. He was the beloved husband of Beatrice M. (Auger) Cassidy, to whom he was married for 44 years. Born in Lawrence on July 18, 1929, Robert was the son of Thomas and Margaret (Ryan) Cassidy. He graduated from Lawrence High School, class of 1946 and then proudly served his country in the U.S. Air Force during the Korean War. He then received his bachelor’s degree from Merrimack College in North Andover. He worked as an auditor in the Commonwealth of Massachusetts Department of Agriculture for over 30 years until his retirement in 1991. Robert was an avid golfer and Boston sports fan. He loved gardening and was especially proud of his rose bushes and his apple tree. Robert will be deeply missed by his wife, Beatrice; his son, Gary Mell and his wife, Janice of Salem, NH; his daughter-in-law, Sharon Mell of Lawrence; his sister, Elaine Najuch of Methuen; 2 brothers, Thomas Cassidy of Sudbury, MA and Charles Cassidy and his wife, Adrienne of Lawrence; 3 grandchildren, Michael Mell and his girlfriend, Amy of Lawrence, James Mell and his wife, Kim of Derry, NH, and Jennie Afonso and her husband, Richie of Haverhill; 9 great grandchildren; and his very special nieces and nephews, Gary Cassidy, Dr. Charles Cassidy, Theresa Cassidy and William Cassidy. He is predeceased by his son, Arthur Mell. Robert’s family would like to express their gratitude to the nurses and staff of the Mary Immaculate Nursing/Restorative Center for all of the care and compassion Robert received while in their care. Family and friends will honor and celebrate Robert’s life by gathering for his calling hours on Thursday, December 20, 2018 from 4 - 8 PM at the Kenneth H. Pollard Funeral Home, 233 Lawrence Street, Methuen. His Mass of Christian Burial will take place on Friday at 11 AM at St. Patrick Parish, 118 S. Broadway, Lawrence. Burial will follow in St. Mary/Immaculate Conception Cemetery in Lawrence. In lieu of flowers, memorial contributions can be made to the Veterans Northeast Outreach Center, 10 Reed Street, Haverhill, MA 01832 or to Mary Immaculate Nursing/Restorative Center, ATTN: Development, 172 Lawrence Street, Lawrence, MA 01841, www.mihcs.org/make-a-gift/. To send a condolence to Robert’s family, please visit www.pollardfuneralhome.com. The Kenneth H. Pollard Funeral Home is honored to serve the Cassidy family.

Lawrence - Robert J. Cassidy, 89 of Lawrence, passed away on Sunday, December 16, 2018 at Mary Immaculate Nursing/Restorative Center in Lawrence. He was the beloved husband of Beatrice M. (Auger) Cassidy, to whom he was married for 44 years. Born... View Obituary & Service Information

The family of Robert J. Cassidy created this Life Tributes page to make it easy to share your memories.