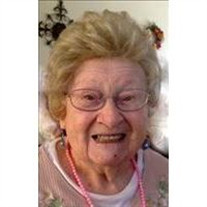 On March 18, three days after turning 101, Rita Carney Chwalek crossed from this life into eternity. Her daughter Jackie was at her side holding her hand and walking Rita to the final line of earthly life. A lifelong resident of Methuen, Rita was born to Helen (Atherton) and Joseph F. Carney on March 15, 1915. She was educated in Methuen schools and graduated from Searles High School. She worked in the Arlington Mills and later in Almy?s Department Store as a manager in the toy department. In 1940 she married Stanley Chwalek, who died just before their 50th wedding anniversary. Together the raised three children: Kathy, Jackie, and Mickey (Michael). One of Rita?s greatest sorrows was the death of her son Mickey in 2012. After the death of her husband, Rita befriended Ernie Mailhot, and they were companions for over 16 years until his death in 2008. They enjoyed Bingo, ballroom dancing, and a wide variety of activities at the Methuen Senior Center. Rita?s God-given creativity for interior decorating and fashion design blossomed throughout her entire life. She was forever redecorating and remodeling her home, giving anyone who asked (or didn?t) her suggestions on decorating their homes. Every holiday was an occasion for displaying decorations indoors and out. Her talent for fashion manifested itself in designing and making clothing for her daughters, everything from winter coats and hats to school clothes and gowns. She was noted throughout town for her creative and unique Halloween costumes which won many prizes. Her last eight years were probably her happiest as she lived in love, laughter, and song at the Grace Morgan House Assisted Living in Methuen. Rita died at Nevins Rehabilitation and Nursing Home after being a patient for only four weeks. All of her sacraments of initiation as well as her marriage were celebrated at St. Monica?s Church. She had a great devotion to the Blessed Mother and prayed the rosary daily for many years. Rita is survived by her two daughters Kathleen O?Wril and husband Timothy of New Gloucester, Maine and Jacqueline Randazza and husband John of Gloucester, Mass. She also leaves a daughter-in-law Paula Carpenter Chwalek of Wrentham, MA. Along with 8 grandchildren, 11 great grandchildren, 3 great-great grandchildren and many nieces and nephews, Rita leaves behind two very special people in her life: Her first grandchild Susan O?Wril Mason, who was devoted to her Grammy right to the end; and Susan Clancy, former activities director at Grace Morgan House. A funeral Mass will be celebrated Wednesday, March 30th at 11 Am at St. Monica?s Church, Methuen, MA. Burial will follow in Elmwood Cemetery. Friends and relatives are invited to calling hours on Tuesday, March 29th from 2-4 and 6-8 PM at the Kenneth H. Pollard Funeral Home, 233 Lawrence St, Methuen, MA. In lieu of flowers, donations may be made to the Grace Morgan House Activities Fund, 489 Prospect St, Methuen, MA 01844 For directions and online guestbook, please visit the funeral home website, www.pollardfuneralhome.com. The Kenneth H. Pollard Funeral Home is honored to serve the Chwalek family.

On March 18, three days after turning 101, Rita Carney Chwalek crossed from this life into eternity. Her daughter Jackie was at her side holding her hand and walking Rita to the final line of earthly life. A lifelong resident of Methuen,... View Obituary & Service Information

The family of Rita (Carney) Chwalek created this Life Tributes page to make it easy to share your memories.