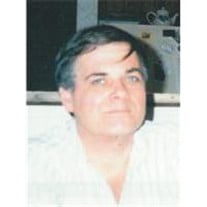 Richard ?Ricky? Michael Fielding, 60 years old, passed away Sunday morning at Lawrence General Hospital in Lawrence after a lengthy illness. Ricky, son of Shirley (Carriero) Fielding and the late Harry Fielding, was born in Lawrence on June 24, 1952 and was a lifelong resident. He was a 1971 graduate of Lawrence Technical School where he presided as class president. Ricky was a member of the Lawrence British Club and served as president for over twenty years. He was also a member of the Lawrence Elks. Ricky worked for Raytheon for over thirty years as a welder. He was a proud member of the Local IBEW 1505 and was President for six years. Ricky served on the board of the Lawrence Housing Authority and the Massachusetts Bay Transportation Authority. He currently held the position of Chairman of the License Commission for the City of Lawrence. Ricky enjoyed harness horse racing and owned several horses through the years. He traveled to many race tracks across the country particularly Saratoga and Rockingham Park pursuing his passion for the sport. He was an avid sports fan following the New England Patriots, Boston Celtics and the Boston Red Sox. He also loved fishing and attending concerts with his brother Brian. Ricky was passionate about politics and supported many candidates throughout the years. Ricky never shied away from a political debate. He was always willing to extend a hand to family and friends to help through difficult times. Ricky is survived by and will be deeply missed by his beloved mother, Shirley Fielding of Lawrence; his brothers, Bruce Fielding and his wife Connie of Lawrence, Brian Fielding of Lawrence and Michael Fielding of Lawrence; brother Alan Fielding and his girlfriend Maggie Martin of Methuen; sister Patty Fielding Newell and her husband John of Methuen and several nieces, nephews and cousins. Family and friends are planning to honor and celebrate Ricky?s life by gathering for his Funeral Mass in St. Patrick?s Church, 118 S. Broadway, Lawrence on Friday, September 14, 2012 at 9 AM. Burial will follow in St. Mary - Immaculate Conception Cemetery, Lawrence. Calling hours in the Kenneth H. Pollard Funeral Home, 233 Lawrence St., Methuen are Thursday, September 13, 2012 from 4 - 8 PM. Those who wish to remember Ricky by making a memorial contribution in his memory are kindly asked to consider the Joslin Diabetes Foundation, 1 Joslin Place, Boston, MA 02215. For directions or to sign the guest book for the Fielding family, please visit us at www.pollardfuneralhome.com. Kenneth H. Pollard Funeral Home, Methuen is honored to assist the family with arrangements.

The family of Richard "Ricky" M. Fielding created this Life Tributes page to make it easy to share your memories.