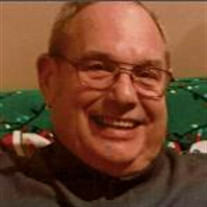 Richard Edwin Gerst, 77, was called home to God on Monday, February 11 after a 51 -day battle following a severe stroke. He was one day shy of his 78th birthday. Richard was the loving son of the late Richard L. and Frances E. Gerst. He was the oldest of five brothers and a sister and grew up in Pittsburgh, Pennsylvania. He earned a full scholarship to Clemson University for football and graduated with a degree in Mathematics. He then enlisted in the U.S. Navy and proudly served aboard the U.S.S. Coconino County as a communications officer during the Vietnam War. He was honorably discharged and went on to earn his Master’s Degree from Lowell State University in Education. He then worked as a math and computer science teacher at Lawrence High School for 39 years. He was much loved and respected and enjoyed making a difference daily in the lives of his students. The center of his life was always his loving family. He was sure to attend every baseball and basketball game and coached his children’s baseball and basketball teams for many years, often while working two jobs to support his family. He enjoyed backyard cookouts in his well-kept yard, watching football and the Red Sox on TV with his sons, and going to the beach with his grandkids, especially to get a Dairy Queen treat afterwards. He will be sadly missed by his loving wife of 49 years, Mary R. Gerst, as well as his son Richard P. Gerst and his wife Liliana and their two daughters Sophia and Daniella of Bristol, CT, daughter Leah M. Pinette and her husband Vaughn and their baby daughter-to-be Anna Leah of Methuen, MA, son Kevin J. Gerst and his wife Allison and their three children Drew, Emma, and Alexandra of Windham, NH, and daughter Mary T. Johnston and her husband Nicholas and their children Sara, Lucy, Casey, and Benjamin of Methuen, MA. Visitation for Richard will be held on Thursday, February 14, from 4-8 pm at the Kenneth H. Pollard Funeral Home 233 Lawrence St, Methuen. Friends and family are cordially invited to attend. A Mass of Christian Burial will be celebrated on Friday, February 15th at 9 am at St. Monica’s Church, 212 Lawrence St, Methuen. Interment to follow at St. Augustine’s Cemetery, Andover. To leave an online condolence please visit www.pollardfuneralhome.com. The Kenneth H. Pollard Funeral Home is proud to serve the Gerst family.

Richard Edwin Gerst, 77, was called home to God on Monday, February 11 after a 51 -day battle following a severe stroke. He was one day shy of his 78th birthday. Richard was the loving son of the late Richard L. and Frances E. Gerst. He... View Obituary & Service Information

The family of Richard E. Gerst created this Life Tributes page to make it easy to share your memories.