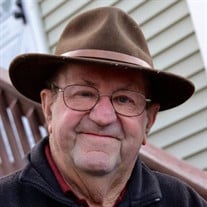 Richard H. “Dick” Boisvert, 87, of Methuen, MA, passed away on Saturday, August 28, 2021. He was born in Sanford, Maine and was the son of the late Albert and Alphonsine (Baron) Boisvert. Richard was born in Sanford, Maine and moved to Lawrence, MA at age seven. He was a graduate of Central Catholic High School, class of 1953. Upon graduation, he served in the United States Army Corp. of Engineers and was honorably discharged in 1957. In addition to his real estate holdings, he owned and operated B&B Heat & Air for over fifty years. Dick loved to golf and travel, but he will be most remembered for his love of socializing. He was a prolific storyteller. Many of the stories depicted the virtues of living a simple, hardworking and fun life. He was tremendously proud of his French-Canadian heritage and many of the stories showed just that. Anyone who sat in his presence would tell you that there was always a life lesson to be learned there; the biggest of which is that you’re here for a good time, not a long time. It is through those stories and tremendous love that Dick’s memory will live on in those who had the privilege of knowing him. He was deeply passionate about passing on his business acumen and could often be found huddled in a corner in deep conversation. He was profoundly devoted to the Methuen Knights of Columbus where he served as President in more recent years. It was through the “Knights” that he gave back to his community by organizing fundraising events such as dinners for community seniors and golf tournaments. Through his efforts, the campaign to save the Methuen chapter of the “Knights” saw the brotherhood reinvigorated and saved from closure. In addition to his parents, he was predeceased by his two siblings, Leo Boisvert and Yvette Johnson; and brother-in-law, Gil Johnson. Dick is survived by his cherished wife, Claire A. (Bretton) Boisvert of Methuen; children, Paula Balcius and her husband, Bob, Russell Boisvert and his wife, Patti, and Michael Boisvert and his wife, Kristine, all of Methuen; adored grandchildren, Joel and Julia Boisvert, both of Methuen; and a sister-in-law, Barbara Boisvert. In addition, he also leaves many nieces, nephews, cousins, extended family, and friends. Family and friends are respectfully invited to attend calling hours on Thursday, September 2, 2021, from 3:00-6:00 PM at Kenneth H. Pollard Funeral Home, 233 Lawrence Street in Methuen. A funeral service will be held at 6:00 PM with military honors at the funeral home. In lieu of flowers, donations in Dick’s memory may be made to Central Catholic High School, c/o Fulfilling The Promise (Student Financial Aid), 300 Hampshire Street, Lawrence, MA 01841 or via www.centralcatholic.net. For directions and online guestbook, please visit the funeral home website, www.pollardfuneralhome.com. The Kenneth H. Pollard Funeral Home is honored to serve the Boisvert Family.

The family of Richard H. "Dick" Boisvert created this Life Tributes page to make it easy to share your memories.