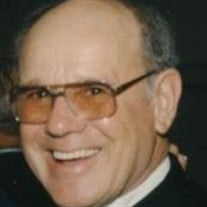 Richard A. Bard Sr., age 87 of Hiram, ME passed away peacefully surrounded by his loving family on January 28, 2019. Richard was born in Stockholm, ME on July 12, 1931 to the late Patrick Sr. and Eva (Albert) Bard. Richard grew up logging trees with his father and brothers prior to moving to Massachusetts in 1965 to work and better his family’s life. He worked for L.D. Body Construction in Lawrence, helping build Route 495 and moving homes. Richard worked in milk transportation, having worked for John Condon of Methuen, Agrimark of Methuen and Bouchey and Sons of Standish, ME. Richard will be remembered to all that knew him as “Dicky” the Milk-Man”. Richard will be remembered as a hard working person who always held a job to provide for his family. Country music was a large part of Dicky’s life. He enjoyed playing guitar and singing good ole country songs to his family. He taught his children and grandchildren how to play guitar. Richard will be remembered as someone who was very friendly and someone who was willing to help family and friends in need, even helping strangers on the side of the road who would soon become his friends. Upon retirement, Richard returned to his birth state of Maine moving to Hiram. Richard was the beloved husband of the late Cecelia (Terrio) Bard with whom he shared 58 years of marriage. He was the devoted father of Gail Malek and her husband Ed of FL, Virginia Desroche and her husband Ronnie of Hiram, ME, Richard A. Bard Jr. and his wife Genevieve of Lawrence, Russell Bard of Lawrence, Toni J. Bard and her partner George Miller of Lawrence, Benjamin Bard and his wife Yvonne of Methuen, George Bard and his wife Joy of Hiram, ME, and Sherri Perrotta and her husband Thomas of Methuen. Dicky was the dear brother of Gerard Bard, Arthur Bard, Billy Bard, Theresa Hallowell, and Bernadette Paradis, all of Maine. He was the loving grandfather of Elaine Malek, Jennifer Malek, Rod Desroche, Brenda Thibodeau, Richard A. Bard III, Travis Bard, Russell Bard Jr., Crystal St. Hillaire, Jessica Brennan, Bobby Brennan, Amanda Bard, Joey Bard, Cassandra Bard, Jacob Bard, Aaron Bard, Tyler Bard, Jeremy Perrotta, Bella Perrotta, Lisa Twombly, Reggie Bishop, Anthony Perrotta, and Vincent Perrotta. Richard is also survived by many great grandchildren, and great-great grandchildren. Friends and guests are invited to call on Friday, February 1, 2019 from 4:00 PM until 8:00 PM at the Kenneth H. Pollard Funeral Home, 233 Lawrence St. Methuen. A Mass of Christina Burial will take place on Saturday, February 2, 2019 at 9:00 AM at St. Monica’s Parish of Methuen. Interment to follow at Immaculate Conception Cemetery. For directions and online guestbook, please visit the funeral home website, www.pollardfuneralhome.com. The Kenneth H. Pollard Funeral Home is honored to serve the Bard Family.

Richard A. Bard Sr., age 87 of Hiram, ME passed away peacefully surrounded by his loving family on January 28, 2019. Richard was born in Stockholm, ME on July 12, 1931 to the late Patrick Sr. and Eva (Albert) Bard. Richard grew up logging trees... View Obituary & Service Information

The family of Richard A. Bard Sr. created this Life Tributes page to make it easy to share your memories.