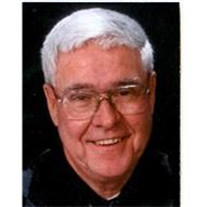 Reverend Mr. Gerard Emile Gagne (Married Permanent Deacon), 71, of Lawrence, MA, returned to the Lord on April 29, 2008. Gerard died peacefully at Sawtell Family Hospice House in Reading MA surrounded by his wife & three children. Gerard is survived by his wife Marguerite Celine (Custeau) Gagne of Lawrence, MA. They would have been happily married 49 years this August. He was born in Lawrence, July 2, 1936, son of the late Arthur and Alice (Mailloux) Gagne. Besides his wife, Gerard is survived by his son Mark and his wife Sheryl Gagne of New Boston, NH with their three children ? Rebecca, Elizabeth & Alicia, his daughter Lisa and her husband Anthony Vitale of Lawrence, MA with their three children ? Joseph, Nicholas & Christopher, and his son Paul and his wife Nicole Gagne of Holden with their three children ? Brianna, Colin & Abigail. As the oldest of 16 children, Gerard also leaves behind: his sisters Rena & her husband Allyn Reynolds of Stanton, MI, Alice and her husband Herman Max of Methuen, MA, Jane and her husband Romeo Croteau of Pelham, NH, Ruth and her husband Arthur (Bud) Provencal of Derry, NH, Marie and her husband Jerry Cloutier of Derry, NH, Doris and her husband David DiPirro of Bedford, NH, his brothers Denis and his wife Marybeth Gagne of Dover, NH, Michael and his wife Debi Gagne of Methuen, MA, and Arthur Gagne of Winchendon, MA. He also leaves behind his stepmother, Florine Predovich of Sun City Center, FL. Gerard was predeceased by his sister Lucy and her husband Joseph Sirois of Lawrence, MA as well as five younger brothers & sisters who died at an early age. As a deacon, Gerard was a communicant of several parishes - most recently of Corpus Christi / Holy Rosary of Lawrence, MA and Espiritu Sancto of Safety Harbor, FL. Prior to this, Gerard was a longstanding communicant of Sacred Heart Parish in Lawrence until it closed in 2005. Gerard also served at Saint Monica Parish in Methuen, MA for several years in the 1980s. Gerard attended grade school at ?Our Lady of Mount Carmel? in Methuen, MA. He attended ?Marist Preparatory School? from 1950-1954 in Bedford, MA for his secondary schooling. He continued his studies at Marist College from 1954-1956 in Bedford, MA. From 1956-1957 he attended ?Marist Novitiate? in Staten Island, NY. Following that, he continued to study Philosophy at Marist College in Framingham Ma from 1957-1958. Gerard received a Bachelor of Arts Degree in History & Political Science from Merrimack College from 1958-1960 and a Masters of Education in Guidance Counseling from Salem State College from 1960-1965. From 1965-1970, Gerard received a Masters of Arts in French & French Literature at Rivier College. He also continued with post graduate work at Central Connecticut College in 1965 for Foreign Languages as well as Boston University in 1966 & 1967 ? again for Foreign Languages. Gerard?s layman?s career was as a teacher for 33 years beginning in 1961. He worked at Methuen High School (formerly Tenny High School) in Methuen Ma where he taught Latin 1 through 4 and French 1 through 4 as well as Advanced Placement Classes. Gerard also taught philosophy. Gerard was also the Foreign Language Department Chairperson & Coordinator from 1965 until his retirement in 1994. Through-out all his years as a department head, he continued his love of teaching. From 1973 to 1975, Gerard took 24 courses where he studied at St. John?s Seminary for the Deaconate Program. He was ordained by the Late Cardinal Medeiros on May 7, 1977. His liturgical ministries included preparation & officiating for the sacraments including Baptisms & Marriages. He also counseled many people during grieving, pre & post marital, celebratory times and others. He was the CCD coordinator for several years at Sacred Heart Parish as well. Gerard officiated the marriage of his three children, baptized and gave first Holy Communion to his nine grandchildren. Gerard also performed many of these same sacraments to many of his brothers, sisters, nieces & nephews as well as many friends and relatives. Family and friends may call at Corpus Christi / Holy Rosary Church at 35 Essex St. in Lawrence, MA from 3 ? 8PM on Monday, May 5th. A Mass of the Resurrection will take place Tuesday, May 6, 2008 at 10 a.m. at Corpus Christi / Holy Rosary Church followed by a gravesite ceremony at Sacred Heart Cemetery in Andover, MA. Those wishing, may make contributions in his memory to ?The Marist Fathers & Brothers of Boston? c/o The Provincial Office, 27 Isabella St, Boston, MA 02116 or Corpus Christi / Holy Rosary Parish at 35 Essex St, Lawrence, MA 01840. Funeral arrangements under the direction of the Kenneth H. Pollard Funeral Home Inc., 233 Lawrence Street in Methuen.

The family of Reverend Mr. Gerard Gagne created this Life Tributes page to make it easy to share your memories.