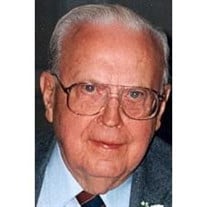 Lawrence, Ma. ? Atty. Rene R. Bernardin, 97, died Monday April 14, 2008 at the Berkeley Nursing Center. He was born in Lawrence, son of the late Magloire and Engenie (Blanchette) Bernardin. Rene was a graduate of Assumption Prep school, graduated Cum Laude from Assumption college, and was a graduate from Boston College Law School. Atty Bernardin had been a distinguished attorney beginning in 1946, and retired from the active practice of law in 1987. Attorney Bernardin began his professional life as a teacher in Van Buren, Maine, and later served with distinction as Principal of Dracut High School. He served in World War II as a cryptographer. Upon completion of his military service, he joined his brother the late Fernand A. Bernardin in the practice of law at the Bay State Building in Lawrence. Attorney Bernardin presented his candidacy for public office in 1953, and was elected Representative of Ward 5 in Lawrence in the State House where he served for two and a half terms. He was appointed Assistant House Counsel to the Massachusetts House of Representatives in October of 1957, until December 31,1975. He was president of the Lawrence Bar Association in 1952, and was a Director and Founding Member of the Bon Secours Hospital Men?s Guild, now known as Caritas Holy Family Hospital Men?s Guild. He served as director of First Essex Savings Bank, now Sovereign Bank for many years. In his early legal and political career, he was an officer of the Lasalle Club and the social naturalization club, French Social, and was very active in Franco-American Community. He was a highly respected legal practitioner specializing in real estate, estate planning, and probate administration. Attorney Bernardin was a former communicant of Sacred Heart Church So. Lawrence prior to its closing. His enjoyments included golf at Merrimack Country Club in Methuen, and Far Corner Golf Club in Boxford and more importantly his family. The widower of Paula J. (Germain) Bernardin he is survived by his son John F. Bernardin of Lawrence, 1 grandson Christopher J. Bernardin of Franklin, NH, 2 greatgrandchildren Justin and Joseph Bernardin and many nieces and nephews. A Mass of Christian burial will take place on Friday morning at 11 o?clock in Our Lady of Good Counsel Parish/St. Augustines Chapel Ames Street in Lawrence. Burial in Sacred Heart Cemetery Andover. Friends may call on Thursday from 3-8 P.M. at the Kenneth H. Pollard Funeral Home, Inc. 233 Lawrence Street in Methuen.

The family of Rene R. Bernardin, Esquire created this Life Tributes page to make it easy to share your memories.