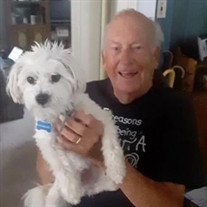 Raymond E. Voter, age 89, passed away peacefully surrounded with his family on Friday, July 2, 2021. Born in Methuen on September 20, 1931 to the late John G. Voter Sr. and Irene (Leach) Voter. After graduating from Searles High School, class of 1951, he enlisted in the United States Navy Seabees serving from 1952-1953 and was stationed on Midway Island for eighteen months. He also served in the Army Reserves from 1953-1957. He graduated from Wentworth Institute with an engineering degree and later entered a long career in construction. At eighty-nine, he was still employed with Pentucket Glass and Aluminum. Ray was a hard-working, devoted family man who was always in great spirits. He valued time spent with family and was proud of their accomplishments. Throughout his life he was active in his community by serving as a Member of the Board of Trade, Carpenter's Union, coaching Methuen baseball and hockey teams and supporting his wife's business Voter's School of Dance. For hobbies, he enjoyed fishing, hunting, carpentry, and travel, especially to the casino. He was preceded in death by two of his siblings, John Jr. Voter and Phyllis Clark. Ray is survived by the love of his life, Pam (Mazzocco) Voter, with whom he just celebrated sixty-six years of marriage on June 19, 2021; his three children, Vanessa Shaheen and her husband, Michael Shaheen of Haverhill, Melanie Grasso and her husband, Alfred Grasso of Florida, and Ray Voter of Methuen; and his sister, Ruth Mason. In addition, he leaves behind his five grandchildren, Nicholas Grasso and his wife, Karista, Daniel Grasso and his wife, Kerri, Ashley Shaheen, Julie Grasso and Aiyanna Grasso; and his beloved great-furbabies, Charlie and Nova. Ray was admired by all who knew him and his presence will forever live in the hearts of his loved ones. Family and friends are respectfully invited to attend funeral services on Monday, July 12, 2021 at 11:00 a.m. at Marsh Corner Community Church, 317 Pelham Street in Methuen. Burial will follow at Elmwood Cemetery, 130 North Lowell Street in Methuen. In lieu of flowers, the family suggests contributions to Honor Flight New England at honorflightnewengland.org. In 2018 Ray was invited to Honor Flight New England, a free trip to Washington, DC with other Veterans, to visit and reflect at their memorials. He spoke frequently about this trip and hoped every Veteran would have the opportunity to go! For directions and online guestbook, please visit the funeral home website, www.pollardfuneralhome.com. The Kenneth H. Pollard Funeral Home is honored to serve the Voter Family.

The family of Raymond E. Voter created this Life Tributes page to make it easy to share your memories.