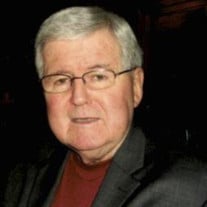 Raymond J. Richard, Jr., age 81, of Andover (formerly of Haverhill) passed away peacefully on October 21, 2021 at the Bear Mountain at Andover Nursing Home. Born in Lawrence, MA on September 29, 1940, the only son of the late Raymond and Harriet Richard. Ray was educated at St. Rita's Grammar School and Central Catholic High School class of 1958. He was forever grateful for the wonderful education he received at Central Catholic. Ray also attended Merrimack College and Lowell Tech. He was employed by the United States Post Office in Lawrence for 30 years. He was the head window clerk and loved his job of servicing the people of the Merrimack Valley. Early on Ray and his wife Carol traveled to Atlantic City by air many times to enjoy the slots and shows. As a couple they also traveled to Foxwoods by car or bus many times over the years. Ray considered "Foxwoods" his second home. As a couple they also traveled to many places with their good friends, Terry and Frank, including Florida, Canada, Mexico, Venezuela, and many day trips as well. Ray was the adventurous one, he was the only one that went hang gliding in Mexico. He also loved Sunday morning breakfast at Hampton Beach with Carol and his son John, where they could take walks on the beach after breakfast. Ray had an insatiable appetite for reading. It was not unusual for Ray to be reading three books at one time, covering a variety of subjects. Many times Ray would be the "Handy Andy" putting together so many toys for his beloved grand daughter, Julia Violet. He loved doing this for his little "Sweetheart". Ray and Carol would have celebrated their 59th year of marriage on October 27, 2021. He is survived by his wife, Carol (Broadhurst) Richard of Haverhill, his only son, John T. Richard, of Haverhill, and his only granddaughter, Julia Violet Richard, of Merrimac, MA. His sister in-law Janice Leyland, of Haverhill and his sister-in-law Patricia Broadhurst of North Andover. He also leaves many nieces and nephews. Ray was also predeceased by his Aunt, Elizabeth Cook. The family would like to thank the staff at Bear Mountain at Andover for their loving care and kindnesses extended to Ray and family. The family would also like to thank Serenity Hospice for their guidance and support during this difficult time. Family and friends are respectfully invited to attend visitation hours on Tuesday, October 26, 2021, from 4:00 PM until 7:00 PM at the Kenneth H. Pollard Funeral Home, 233 Lawrence Street, Methuen, MA. A Mass of Christian Burial will be held at St. Lucy's Parish Church, 254 Merrimack St. Methuen at 10:00 AM Wednesday, October 27, 2021. Interment to follow at Immaculate Conception Cemetery of Lawrence. In lieu of flowers memorial donations may be made to the Disabled American Veterans, 112 Haverhill Street, Lawrence, MA 01840. The Kenneth H. Pollard Funeral Home is honored to serve the Richard Family.

Raymond J. Richard, Jr., age 81, of Andover (formerly of Haverhill) passed away peacefully on October 21, 2021 at the Bear Mountain at Andover Nursing Home. Born in Lawrence, MA on September 29, 1940, the only son of the late Raymond and Harriet... View Obituary & Service Information

The family of Raymond J, Richard Jr. created this Life Tributes page to make it easy to share your memories.