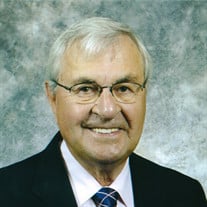 Dr. Raymond E. Cormier, 91, of Methuen, passed away peacefully on October 4, 2017 surrounded by his devoted family at the Nevins Nursing & Rehabilitation Centre. Dr. Raymond Cormier was born on Veterans Day, November 11, 1925 to his hardworking parents Francis and Julie (Richard) Cormier in Lowell, MA. After graduating from the Searles High School with the Class of 1944, he felt the call of duty and enlisted in the United States Navy proudly serving on the USS Antietam in the Pacific Theater during WWII. Dr. Cormier had a deep and devoted passion for sports and physical fitness that developed during childhood and set him on a path for athletic achievements that spanned many decades. During his school years and later in life he was recognized and awarded for his participation in football, basketball and track. After Dr. Cormier was discharged from the service, he married his sweetheart, Audrey Belle Gorham, in a simple ceremony. He truly believed in the value of a secondary education and attended St. Michael’s College graduating with a bachelor’s degree in 1952. He worked for several years at John Hancock Life Insurance until he decided that he needed to further his education. Being a family man with several children, in 1956 he attended Palmer Chiropractic College in Davenport, Iowa. Shortly after graduating with his doctorate in chiropractic medicine his career path took him in a different direction to Methuen High School and to Weston schools where he was a physical education teacher. Dr. Cormier started his career in chiropractic medicine with Dr. Herbert Craven in Salem, NH. He eventually went into private practice with his daughter at Windham Chiropractic until his retirement. He also worked for many years for the Boston Red Sox organization. Dr. Cormier accomplished many feats that many people only can dream of accomplishing. He was one of the founding members of the New England 65+ Runners Club, where he also on the board of directors. He was also inducted into their hall of fame. Dr. Cormier was also a member of the Merrimack Striders, ran in two Boston marathons and climbed Mt. Washington. He was a truly devoted family man who was a selfless, generous and kind soul who without no hesitation would give you the shirt off of his back. He was a devout Catholic who was a communicant of Saint Monica’s. Dr. Cormier touched many lives in many different circles and will be fondly remembered, cherished and missed. Dr. Cormier is survived by his three beloved children; his daughter Donna Rae M. Cormier of Methuen, his son William F. Cormier and his wife Nancy of St. Augustine, FL, and his daughter Maryanne Cormier of Jacksonville. FL. He was also a proud grandfather and great-grandfather. Dr. Cormier is also survived by his brother William Cormier and his wife Lois of California and several loving nieces and nephews. In addition to his parents, he was preceded in death by his wife Audrey B. (Gorham) Cormier in 2003 with whom he celebrated 59 years of marriage together and his five sisters; Bernadette Fredette, Gemma Perry, Joan Chadwick, Marie Crawford and Gabrielle Cormier. Visitation for Dr. Raymond Cormier will be held on Tuesday, October 10, 2017 from 4 – 8 PM at the Kenneth H. Pollard Funeral Home, 233 Lawrence Street, Methuen. Friends and family are cordially invited to attend. A Mass of Christian Burial will be celebrated on Wednesday, October 11, 2017 at 11 AM at Saint Monica’s Church, 212 Lawrence Street, Methuen, MA. Interment to follow at Elmwood Cemetery, 130 North Lowell Street, Methuen. In lieu of flowers, please make a contribution in Dr. Cormier’s memory to either the Nevins Nursing & Rehabilitation Centre, 10 Ingalls Court, Methuen, MA 01844 or the Disabled American Veterans, 52 Richard Circle, Woburn, MA 01801. The Kenneth H. Pollard Funeral Home is proud to serve the Cormier family.

The family of Dr. Raymond E. Cormier created this Life Tributes page to make it easy to share your memories.