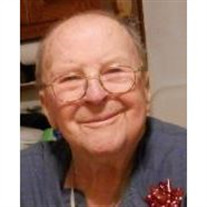 METHUEN ? Raymond C. Riddle 81, passed away peacefully on Tuesday July 9, 2013 at his home with his family by his side. Born and educated in Wykoff, Minnesota, he was the son of Alex and Lily Ley. Ray served in the U.S. Air force as an MP during the Korean Conflict. He met his beloved wife Barbara Keyes in Kalamazoo, Michigan and moved to Methuen, MA in 1955. Ray worked as a painter for many years, before working for JJ Levis Paper Company in Lawrence retiring in 1998. Ray along with his late wife Barbara enjoyed traveling for many years to their favorite place of Aruba. He enjoyed watching the Boston Red Sox, Celtics and Bruins and also the New England Patriots. He also loved getting together with his family here in Methuen, Minnesota and Nova Scotia. The widower of Barbara (Keyes) Riddle after 58 years of marriage and is survived by his son, Lindsey Riddle and his wife Julia of Methuen, MA; a granddaughter Amy Riddle. Ray is also survived by his four sisters and one brother all of Minnesota, Edith Christopherson, June Anderson and her husband Wayne, Harriet Vrieze, Alice Winslow and Merl Riddle and his wife Barbara. A sister-in-law Janet Elias of North Andover, MA; brother-in-law Frank Keyes and his wife Mary of Methuen, MA. He also leaves life-long friends from Nova Scotia, Mary Elizabeth MacLellan, Mary and Pat Kelly many nieces and nephews. The family would like to extend their appreciation to the staff of Merrimack Valley Hospice Home Health VNA and the Cancer Management Center at the Holy Family Hospital for all their care to Raymond during his illness. Also a special thank you to our angels Diane Murphy and Joann White. Raymond was predeceased by his brothers Melvin and Earl Riddle and his sister Delores Calhoun ARRANGEMENTS: Memorials can be made to Merrimack Valley Hospice 360 Merrimack St. BLDG 9 Lawrence, MA 01843. Visiting hours will be Monday from 9:00a.m. ? 11:00a.m. followed by a funeral service in the Kenneth H. Pollard Funeral Home, Inc., 233 Lawrence Street Methuen, MA 01844. Burial will follow in the Elmwood Cemetery also in Methuen. For directions or condolences please visit www.pollardfuneralhome.com

METHUEN ? Raymond C. Riddle 81, passed away peacefully on Tuesday July 9, 2013 at his home with his family by his side. Born and educated in Wykoff, Minnesota, he was the son of Alex and Lily Ley. Ray served in the U.S. Air force as an MP during... View Obituary & Service Information

The family of Raymond C. Riddle created this Life Tributes page to make it easy to share your memories.