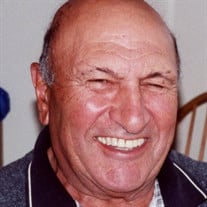 Dracut, MA – Raymond L. Brox, age 95, died peacefully at home surrounded by his loving family on March 22, 2019. He was the beloved husband of the late Dorothea (Kaatz) Brox with whom he celebrated their 65th wedding anniversary this past October. Ray was the youngest and last surviving sibling of nine born to Charles and Margaret (Kasouf) Brox, both Lebanese immigrants who settled in Dracut and started Brox Farm in 1902. It was there at the farm that he was born on April 26, 1923. His youth was spent working the farm with his family and attending public schools in Dracut, graduating from Dracut High School in 1942. He was a former vice president of Brox Industries, a paving and construction materials company founded by his brother George in 1947. Raymond was also known for his golf course and ski areas he operated. In the late 40’s, he operated the Kenwood Ski Slope in Dracut. Soon after, Lowell native Ralph Bean, owner of the Waterville Inn, enlisted Ray to expand and operate the ski area in Waterville Valley, NH. They formed a partnership and throughout the 1950s and early 60s, made many improvements, most notably in 1952, when they acquired a used T-bar lift from Colorado. The 1700-ft. lift was transported across the country, reassembled in Waterville, and was one of the first major ski lift relocations in U.S. history. Ray and Ralph also purchased one of the first Tucker Sno-Cats in the country, which was used to groom the new trails and carry skiers across the valley to the base of Tecumseh Trail. In 1968, Ray and Dotty with his brothers Frank and John, founded the Hickory Hill Golf Course in Methuen, MA. The 18-hole course was designed by Manny Francis. Ray was running the golf course and supervising quarry plants for Brox Industries until his retirement to Sun Valley, ID. His later years were spent traveling, golfing, skiing, and hiking with Dotty and his family. Hickory Hill Golf Course celebrated its 50th anniversary last year and remains family-run. Beginning with the farm, his brother’s business, and then with his own business, family came first to Ray. Over the years, there was always at least two relatives working together on different ventures. For decades, he could be found every Sunday enjoying breakfast at the clubhouse with family and friends. With Ray’s passing, so goes the last of his generation born in the farmhouse on Broadway Road, in Dracut. The Brox Farm remains a fixture there and will open this spring for its 117th season, a lasting testament to his parents and all of his siblings who planted the seeds long ago. Ray is survived by his children, Eric (Debra) Brox, Nancy Brox, William (Julie) Brox and Peter Brox; his grandchildren Georgia Brox and Sophia Brox; in-laws Harriet Previte and William (Lucille) Kaatz, and numerous nieces and nephews. In addition to his wife, he was predeceased by his grandchildren Raymond Richard and Nancy Zoe Brox; sisters-in-law Antoinette, Gladys, Eleanor, Frances and Priscilla Brox, and Evelyn (Zygmunt) Tomkiewicz; brother-in-law Albert Previte, and his eight siblings, sisters Adele and Bertha Brox, brothers Joseph, George, Frank, John, Stanley and Albert Brox. Visitation for Ray will be held on Tuesday, April 9, 2019 from 4 – 8 PM at the Kenneth H. Pollard Funeral Home, 233 Lawrence Street, Methuen. Friends and family are cordially invited to attend. A Mass of Christian Burial will be celebrated on Wednesday, April 10, 2019, 11 AM at Saint Joseph Melkite Church, 241 Hampshire St, Lawrence, MA 01841. Burial will follow at Richardson Cemetery in Dracut. In lieu of flowers, please make a donation in Ray’s memory to the MGH Urology Education Fund, Attn: Drs. Dicken Ko & Michael Blute, 55 Fruit Street, GRB 1102, Boston, MA 02114. The Kenneth H. Pollard Funeral Home is proud to serve the Brox family.

Dracut, MA &#8211; Raymond L. Brox, age 95, died peacefully at home surrounded by his loving family on March 22, 2019. He was the beloved husband of the late Dorothea (Kaatz) Brox with whom he celebrated their 65th wedding anniversary this... View Obituary & Service Information

The family of Raymond L. Brox created this Life Tributes page to make it easy to share your memories.