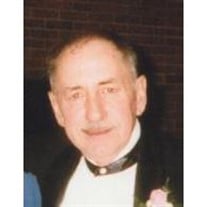 Ralph C. Allen, Jr., 78, a longtime resident of Methuen, died peacefully Wednesday, August 29, 2012 at Merrimack Valley Hospital in Haverhill after a period of failing health. Ralph, son of the late Ralph C. and Anna (Easton) Allen, was born in Lawrence on November 27, 1933 and lived in Methuen most of his life. He graduated from Lawrence High School and served our country in the United States Navy during the Korean War. His beloved wife, Ruth M. (Magoon) Allen, died in 2000. Prior to his retirement, Ralph was an electrician with Tyre Rubber in Balardvale, Converse Rubber and finally Sweetheart Cup. He was an avid bowler and was a member of both the Pop Spina and the C/C Bowling Leagues. He was an enthusiastic sports fan following the Boston Red Sox, New England Patriots, Boston Celtics and Boston Bruins. He greatly enjoyed his vegetable garden and playing cards. Ralph will be sadly missed by his four daughters, Cynthia A. Wooten and her husband E. Vance of Kansas City, Missouri, Melissa L. Allen of Methuen, Melanie L. Allen of Methuen and Rebecca Demers and her husband David of Sandown, New Hampshire; five sons, Douglas K. Allen of Methuen, Randall S. Allen and his wife Kathleen of Methuen, Robert D. Allen and his wife Lisa of Georgia, Kevin P. Allen and his wife Amanda of Tennessee and Stephen T. Allen of Georgia; one sister, Beverly Judge of Tucson, Arizona; fourteen grandchildren and many nieces and nephews. It being his request, the funeral service will be private. There are no visiting hours. In lieu of flowers, the family suggests that contributions be made to a charity of one?s choice. To share a condolence with the Allen family, please visit us online at www.pollardfuneralhome.com. The Kenneth H. Pollard Funeral Home, 233 Lawrence St., Methuen is honored to assist the Allen family with arrangements.

The family of Ralph C. Allen, Jr. created this Life Tributes page to make it easy to share your memories.