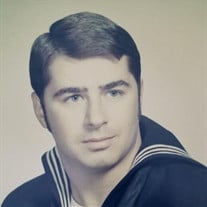 Philip “Phil” A. DiBenedetto, 74, of North Andover, passed away May 25, 2019 at Lawrence General Hospital surrounded by his devoted family. Born to the late Philip D. and Ida (Tarquinio) DiBenedetto on December 4, 1944 in Lawrence, he graduated from Lawrence High School with the Class of 1962. After high school, like so many of his generation, Phil enlisted in the United States Navy. He served in the Submarine Service aboard the USS Will Rogers during the Vietnam War. After his discharge from the service, he attended Lowell Technical Institute graduating with the Class of 1973. As a Nuclear Engineer, Phil worked for the Nuclear Regulatory Commission for several years. After the NRC, he spent the remainder of his career in the nuclear power industry, often traveling internationally. A man who accomplished many things in his life, Phil enjoyed many different hobbies. He had a love for playing the violin, guitar, enjoyed wood working, camping, and loved boating. Phil was a member of the Disabled American Veterans, as he was one himself. Phil was also Revolutionary War reenactor, who enjoyed bringing history to life. As the patriarch of his family, his greatest accomplishment in life was being a husband, father, and grandfather. Phil is survived by his beloved wife, Diane E. (Taylor) DiBenedetto, of North Andover, with whom he celebrated 50 years of marriage. He was the cherished father to his two children; his daughter, Marie Riddell and her husband Christian of Hopedale, MA, and his son, Damon DiBenedetto also of North Andover. Phil was the proud grandfather to Jack and Holly Riddell. He is also survived by many nieces and nephews. In addition to his parents, Phil was preceded in death by his sister Elaine Toro. Visitation for Phil will be held on Friday, May 31, 2019 from 4 – 8 PM at the Kenneth H. Pollard Funeral Home, 233 Lawrence Street, Methuen. Friends and family are cordially invited to attend. A graveside funeral service will be held on Saturday, June 1, 2019 at 11 AM at the Elmwood Cemetery, 110 North Lowell Street, Methuen. To leave an online condolence, please visit www.pollardfuneralhome.com. The Kenneth H. Pollard Funeral is proud to serve the DiBenedetto family.

Philip &#8220;Phil&#8221; A. DiBenedetto, 74, of North Andover, passed away May 25, 2019 at Lawrence General Hospital surrounded by his devoted family. Born to the late Philip D. and Ida (Tarquinio) DiBenedetto on December 4, 1944 in Lawrence,... View Obituary & Service Information

The family of Philip "Phil" A. DiBenedetto created this Life Tributes page to make it easy to share your memories.