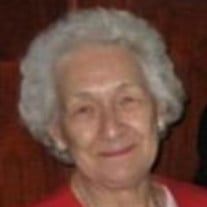 Pauline M. (Charest) Messer, formerly of Methuen, MA, passed away peacefully on Wednesday, November 24, 2021 at the home of her daughter and son-in-law in Michigan. She was ninety-two years old. She was born on January 15, 1929 in Lawrence, MA, to the late Alfred and Laura Lucille (Beaulieu) Charest. Pauline spent her childhood in Lawrence and Ballardvale, graduating from Lawrence High School, class of 1947. Pauline met the love of her life, Frank H. Messer, Jr. in December 1946 when they were coworkers at Brockelman’s Market and she offered him a ride to the work Christmas party. Frank convinced her to go on a date with him on Christmas Day, and they married eight months later on August 31, 1947. They were happily married for fifty-nine years until Frank’s passing in January 2007. She was proud of her long career in the financial industry, having worked for the Internal Revenue Service, serving in managerial roles for Bank of New England and its subsidiaries and ending her career at the Lawrence Firefighters Federal Credit Union. Pauline instilled in her children, grandchildren and great-grandchildren an unmatched work ethic and a charitable spirit. Pauline and Frank traveled the world together making friends around the globe. She enjoyed crossword puzzles, going on long car rides, winning at cribbage and spending summers at the beach where she was known for her high ski-ball score. Pauline had a great devotion to God, to her faith and especially to her church, Grace Episcopal. Her greatest joy in life was her large family. Her door was always open and you could expect to enjoy a day of good food, a nice glass of wine, and family on any Sunday at Nana and Papa’s house. She was predeceased by her son-in-law, Kevin Ord; two great-granddaughters and her brothers and sisters, Alfred Charest, Jr., Regina White, Helen Ramsey Vernile, and Daniel Charest. Pauline is survived by her nine children and their spouses, Frank H. Messer, III and Diane of East Hampstead, NH, Charlotte Parks of Hooksett, NH, Brian Messer and his wife, Jeanette Messer of New Jersey, Joyce Fusco and Neal Tetreault of Florida, Karen Ord of Methuen, Richard and Hyeyong Messer of Lawrence, Lynn and Daniel Curtin of Pelham, NH, Christine and Robert Muise of Michigan, and Jeffrey and Lynne Messer of Methuen; her brother, Fr. Edmund Charest of Boston; and her sister-in-law, Arla Opperman of Colorado. She will be forever missed by her twenty-nine grandchildren, Renee Young, Lisa Young, Tracy Beane, Thomas Robichaud, Nathaniel Messer, Kevin Ord, Jr., Frank Messer, IV, Kristine Giarrusso, Jessica Sudyka, Kathryn Forina, Abiel Messer, Nicholas Parks, Matthew Parks, Erica Hodgeson, Christopher Messer, Sarah Mishler, Daniel Curtin, Kathryn Muise, Alicia Curtin, Elizabeth Muise, Therese Bratton, Timothy Curtin, Mary, Margaret, Anna, Claire, John, Natalie and James Muise; cherished forty great-grandchildren; and four great-great grandchildren. Family and friends are respectfully invited to attend calling hours on Friday, December 3, 2021, from 8:15-10:15 AM at the Pollard Funeral Home, 233 Lawrence Street in Methuen. Funeral services will be held on Friday, December 3, 2021 at 11:00 AM at Grace Episcopal Church, 35 Jackson Street in Lawrence. Burial will follow at Elmwood Cemetery in Methuen. The Kenneth H. Pollard Funeral Home is honored to serve the Messer Family.

Pauline M. (Charest) Messer, formerly of Methuen, MA, passed away peacefully on Wednesday, November 24, 2021 at the home of her daughter and son-in-law in Michigan. She was ninety-two years old. She was born on January 15, 1929 in Lawrence,... View Obituary & Service Information

The family of Pauline M. Messer created this Life Tributes page to make it easy to share your memories.